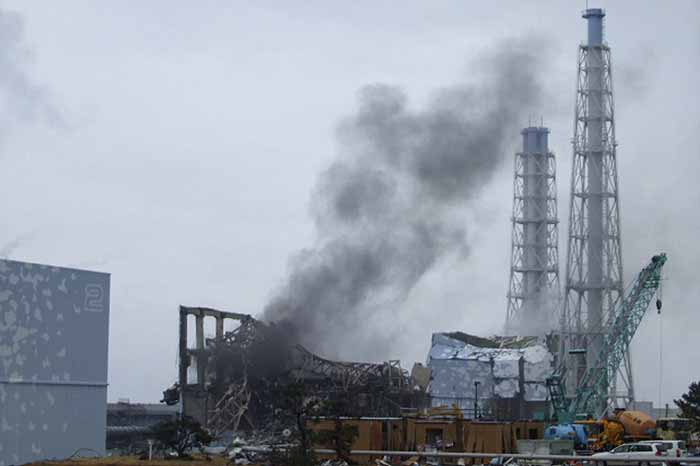 In the latest series of troubles to stall moves to stabilise the radiation leaking plant, work to connect power cables to No. 3 and No. 4 reactors was halted after smoke belched from the buildings of No. 2 and No. 3 reactors, said Tokyo Electric Power Co. (TEPCO), which operates the plant.

It said it will resume the operation tomorrow after observing the situation at the site.

Hidehiko Nishiyama, a spokesman for the Nuclear and Industrial Safety Agency was quoted as saying by Kyodo news agency that the causes of the smoke remain unknown and that work to resuscitate power and cooling systems at the troubled reactors will be delayed.

Yukiya Amano, the Director General of the International Atomic Energy Agency (IAEA) who made an emergency trip to Japan last week, was quoted as saying by Kyodo that the situation at the Fukushima plant "remains serious".

TEPCO said it had briefly evacuated its workers after grayish and blackish smoke was spotted at the No. 3 reactor around 3:55 p.m. above a pool storing spent nuclear fuel.

Even as the smoke stopped after 6 p.M., TEPCO later detected white smoke was rising through a crack in the roof of the building that houses the No. 2 reactor at around 6:20 p.m, the report said.

It forced the Tokyo Fire Department to halt spraying water for the day to cool the overheated fuel rods. It will suspend the operation until safety at the site is confirmed, it said.

Prime Minister Naoto Kan said slow but "steady progress" is being made in tackling the brewing crisis at the quake-hit power plant.

Kan also told a Cabinet-level emergency disaster headquarters meeting held at his office that he will gear up for reconstruction of the eastern Japan areas pummeled by the March 11 earthquake and ensuing tsunami.

Meanwhile, the death toll from the earthquake and tsunami that hit northeastern and eastern Japan and the number of those reported missing touched almost 22,000, the National Police Agency said.

The number of deaths reported in a total of 12 prefectures came to 8,649, while people reported by their relatives to be missing climbed to 13,262 in six prefectures. Police have identified about 4,080 bodies, including 2,990 returned to their families, the agency said.

Japan will monitor radiation levels in the Pacific Ocean near the Fukushima plant, where firefighters have been using seawater to cool reactor units, officials said.

The cooling systems -- designed to protect the plant's six reactors from a potentially disastrous meltdown -- were knocked out by the earthquake and tsunami that struck Japan's northeast Pacific coast on March 11.

On Monday, TEPCO finished laying cables to transmit electricity to the No. 4 reactor, as a step toward resuscitating the power systems at the No. 3 and No. 4 reactors, according to the utility and the nuclear agency.

The plant operator was also trying to restore a ventilation system to filter radioactive substances from the air and some measuring equipment at the control room of the No. 2 reactor, but this mission remained uncompleted due to the temporary evacuation.

It may take more time before the vital cooling system is restored at the No. 2 reactor, the containment vessel of which suffered damage to its pressure-suppression chamber, as some replacement parts are needed for the electrical system, the agency added.

Amid fears of contamination, the government ordered Fukushima and three other prefectures hit by the disaster to suspend shipments of spinach and another leaf vegetable following the detection of radioactive substances in the produce.

Yukio Edano, the Chief Cabinet Secretary, said the readings for radioactive substances found in the produce were at levels exceeding provisional limits set under the Food Sanitation Law but "aren't readings that would affect humans."

Authorities have also started tests to determine the possible impact on fish following radioactive contamination in the food supply.

Even as authorities struggled to cope with the massive humanitarian crisis, the World Bank said the disaster could cost Japan up to USD 235 billion.

Continue FREE with Ads Pay Rs. 1 to Read Without Ads
READ MORE IN:
International
Next Story : Telecos to Pay Up Rs 700 Cr for Violating Laws
Download the Outlook ​Magazines App. Six magazines, wherever you go! Play Store and App Store