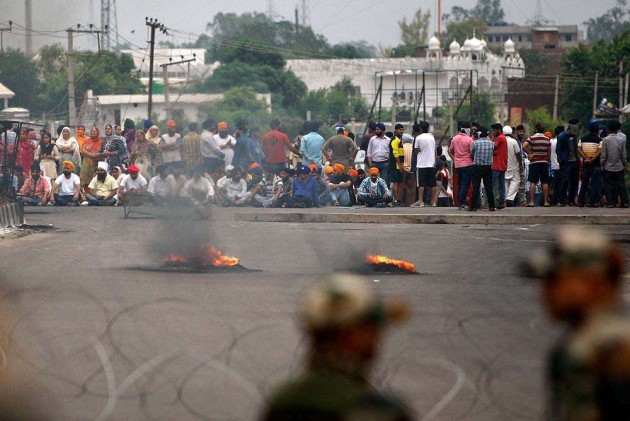 Situation in Jammu was "tense" today as Sikh youths defied prohibitory orders and held protests in various areas as part of a three-day old agitation which is spreading and saw one more policeman being stabbed and his AK rifle taken away.

Protests were also held in Kashmir besides Poonch, Rajouri and other parts of Jammu region today over the death of a youth in clashes that erupted in Jammu yesterday after hundreds of Sikhs blocked road and pelted stones at cops over removal of posters of Khalistani militant leader Jarnail Singh Bhindranwale.

Streets of Jammu wore a deserted look and business establishments remained closed. Mobile and internet services were also suspended in Jammu. Schools and colleges in several districts of the region were closed.

Police and paramilitary forces have been deployed in strength in sensitive areas of Jammu city where the situation is described by authorities as "tense but under control".

Authorities had clamped Section 144 of CrPC, which bars gathering of more than four persons at a place, in the entire Jammu district and curfew like situation prevailed in violence-hit areas of Satwari-Ranibagh-Gadigarh-R S Pura belt and elsewhere.

The constable Joginder Pal, who is Personal Security Officer (PSO) of Deputy Superintendent of Police (Jammu East) Mohammad Rafiq, was shifted to the GMC hospital, where his condition has improved, the police officer said.

"We have recovered the AK-rifle from some people this afternoon and a case has been registered. Arrest will also take place," SDPO said.

This was the second such incident as earlier on Wednesday, a sikh protester carrying sharp edged weapon stabbed a Sub-Inspector Arun Kumar. His condition is now stated to stable in GMC hospital.

A bandh was observed in Poonch border town of Jammu region, where leaders belonging to all religions sat on protest dharna and called for the maintaining clam amid condemning the death of youth in Police firing.

Protests and dharnas were also held in Rajouri town, Rajbhagh, Hatli Morh and Lakhipur on Jammu-Pathnakote in Kathua district and Udhampur, reports said, adding that traffic was disrupted on highway for two to three hours.

Members of the community held protests at various places in Kashmir also over the killing of the youth, alleging "high handedness" police and raising slogans against the government.

Protests were held at Press Colony and Amira Kadal near Lal Chowk here, officials said. Similar protests were held in Baramulla in north Kashmir and Awantipora in south, police said, adding the protestors temporarily blocked the Srinagar-Jammu highway at Awantipora.

Singh, the Minister of State in the Prime Minister's Office, said the Home Minister has offered all possible support to the Jammu and Kashmir government for dealing with the situation.

Rajnath Singh has spoken to Chief Minister Mufti Mohammad Sayeed and offered him sufficient number of armed forces personnel in case the need arises, Jitendra Singh said, adding, "I hope the situation will be brought under control very soon."

Shiromani Gurdwara Prabandhak Committee has, in a letter to the state government, condemned police action regarding removal of the hoarding carrying the photograph of Jarnail Singh Bhindrawale and accused police of mishandling the situation and allowing it to go out of control. It has demanded suspension of SSP Jammu, Uttam Chand and SHO Satwari Kulvir Singh.

A youth, Jagjit Singh, was killed yesterday and seven others including policemen were injured in clashes between police and a large group of sikhs who blocked roads here.

The condition of the three policemen has been described as critical by doctors, police said here.

The Chief Minister as well as his deputy Nirmal Singh has appealed for peace.

Expressing deep sorrow and anguish over the loss of a precious human life during protests by the members of the sikh community in Jammu, Sayeed had said that while it is the responsibility of the police to maintain law and order, at the same time Standard Operational Procedure (SOP) should be strictly adhered to in order to avoid such tragedies during public protests.

Nirmal Singh today voiced confidence that things will be controlled "within a short span of time" and said talks were being held with community leaders.

He said an investigation is being held into the incident involving killing of the youth and the guilty will face action in accordance with law.

"It is very unfortunate that this situation has emerged in Jammu and in a particular area. The administration is on the job and we are meeting the people there, the leaders of the community and we hope that the situation shall be brought under control," he said.

"I appeal to the people, especially the leaders of the community, that they must maintain peace and communal harmony because it (protests) is not in larger interest of the people of Jammu and Kashmir and India also," he said.

Former Chief Minister Omar Abdullah, meanwhile, hit out at the PDP-BJP government over waving of Pakistani flags in the Valley and emergence of Khalistani posters in Jammu, saying it has not been able to bring "regional balance" in the state.

"Pakistani flags in Kashmir & Khalistani posters in Jammu. This wasn't the regional balance we were promised by the Modi-Mufti accord," Omar wrote on micro blogging site, Twitter.

"My heartfelt condolences to the family of the young man killed by police firing in Jammu today. May his soul rest in peace," Omar said.

Meanwhile, All Parties Sikh Coordination Committee (APSCC) has expressed concern over the killing and demanded a judicial probe into the incident.