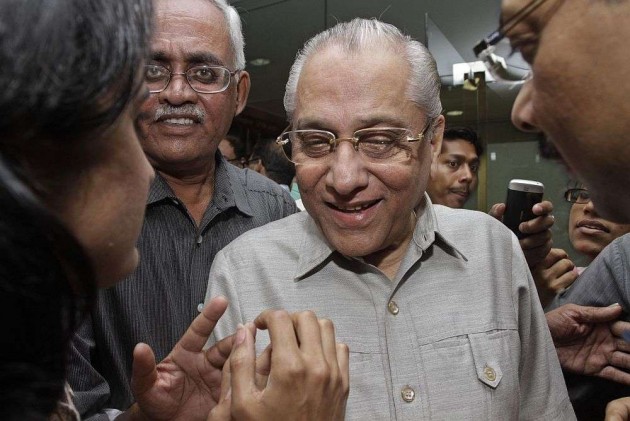 Veteran cricket administrator Jagmohan Dalmiya today returned as the BCCI President after being unanimously elected at the Board's Annual General Meeting but the N Srinivasan camp suffered a setback when rival faction's Anurag Thakur edged out Sanjay Patel for the Secretary's position here.

Thakur's slender one-vote victory over Patel provided the only moment of triumph for the anti-N Srinivasan camp at the elections which were swept by the ruling group loyalists at the much-postponed AGM. Srinivasan himself could not contest for the President's post owing to a Supreme Court directive.

The road for Dalmiya was cleared after former President and NCP leader Sharad Pawar failed to get a proposer from east zone, prompting the Maratha strongman to pull out of the race.

BJP leader Thakur, it is learnt, won by just one vote over Srinivasan loyalist Patel, a scenario unlikely to have emerged had there not been cross-voting during the election process.

It is learnt that two members did not vote at all, while a third who owes allegiance to a leading political party decided to vote for Thakur.

In the case of Joint Secretary's position, both Desai and Choudhary garnered 15 votes each but Shivlal Yadav, who chaired the meeting, tilted the scales in Choudhary's favour with his casting vote.

However, the fact that other anti-Srinivasan camp candidates lost the elections proved that cross-voting took place only for Thakur.

The BCCI issued a press release announcing the names of the winners for each position but did not divulge their vote share. It also said that audited accounts for the FY 2013 – 2014 were approved during today's proceedings.

The AGM also ratified Srinivasan's position as the ICC Chairman, according to a top official.

Another decision taken at the AGM was that Thakur will now represent the BCCI at the ICC's Chief Executive Committee meetings. The AGM also decided to extend the tenure of the current national selection panel for six more months.

The 74-year-old Dalmiya, President of the Cricket Association of Bengal (CAB), was unanimously accepted by all the units loyal to Srinivasan to return to a position he held more than a decade back.

Dalmiya's bid got a boost after Pawar failed to get any proposer from the East Zone, whose turn it was to nominate the president. The former ICC President had held the top post in BCCI between 2001 and 2004.

All the six state units from the East Zone owed allegiance to the Srinivasan camp when his loyalists met here on Sunday.

Maratha strongman Pawar, who was projected as a possible candidate for the president's post, had also met his supporters.

Dalmiya's elevation to the position was necessitated after Srinivasan was forced to stay away from the election owing to a Supreme Court directive, which reduced his role to merely voting.

In fact, the AGM itself was delayed several times due to the legal battle that Srinivasan is fighting in the top court.

The apex court is currently hearing the IPL spot-fixing scandal in which conflict of interest with regards to Srinivasan's position as BCCI President and IPL team owner came in for sharp criticism from court.

A member of the anti-Srinivasan faction who attended the meeting alleged that Shivlal Yadav chaired the AGM in a very "undemoctratic way".

He claimed that Baroda Cricket Association representative Rakesh Parikh was disqalified from voting and that had a bearing on the results.

Two rival groups from Baroda Cricket Association turned up for the AGM and Samarjitsinh Gaekwad was allowed to participate in the proceedings.

"No satisfactory explanation was given by Yadav as to why Parikh was disqualified. Despite repeatedly asking Yadav, he gave no reply. That ultimately resulted in many of the anti-Srinivasan candidates losing the election", the member claimed.

He said some of the West Zone units may contemplate moving the court challenging the elections.