It Was the Perfect Time to Leave the Game: Tendulkar 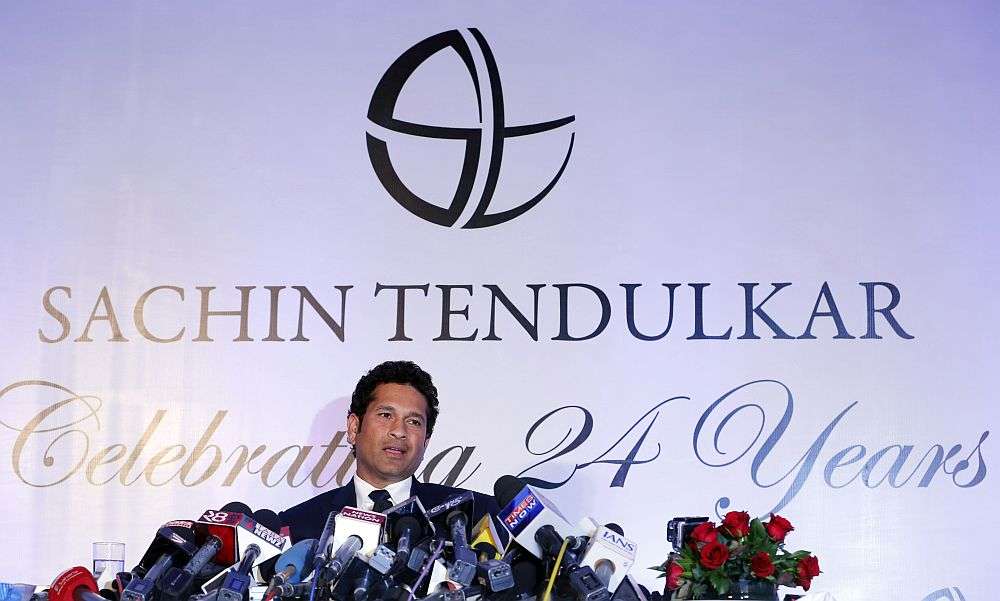 Print
A
A
A
increase text size
Outlook November 17, 2013 17:54 IST It Was the Perfect Time to Leave the Game: Tendulkar

The feeling has not quite sunk in yet but batting icon Sachin Tendulkar today said it was the perfect time to end his dream journey in cricket as his body was finding it tough to cope with the rigours of international cricket.

A day after bidding an emotional farewell to the game which he considers his "oxygen", Tendulkar said that 75 per cent of his life had revolved around cricket and he had no regrets about hanging his boots after playing for 24 years.

"It hasn't struck me that I won't play cricket again. It has been a dream journey, no regret that I am leaving cricket. This was the right time to stop playing cricket. It was an enjoyable journey," Tendulkar said at a packed press conference here.

"I had a question and when I looked for an answer, I felt it was the perfect time to leave the game."

The 40-year-old maestro, who brought down the curtains on his career after playing his 200th Test yesterday, indicated that he would remain associated with the game after enjoying some time off.

"Cricket has been my life, it is oxygen to me. In 40 years, at least 30 years I have played proper cricket. 75 per cent of my life has been cricket, so there will be some association with the game, maybe not in the immediate future. Still, it is only 24 hours since my retirement, give me at least 24 days to relax. Then I will see what to do," he said.

The champion batsman answered questions ranging from his best playing moments to his tearful retirement during the hour-long interaction with the media.

Asked why he touched the wicket in reverence yesterday, Tendulkar said he just wanted to thank the game which made him an icon.

"I knew never ever in my life I would get to do that again. And that is where my life started and those 22 yards gave me everything. It's like a temple for me. I wanted to say thank you to cricket. I just thanked cricket for everything that I got in my life," he said.

Tendulkar explained how his body was not responding to his desire to continue and how it was becoming harder by the day to focus on training.

"I was still enjoying cricket. I have always said the day I felt I should stop playing, I would inform you. I got that feeling, because after 24 years, you have to appreciate I had many injuries, not easy to overcome. You reach a stage when your body gives you a message, enough of this physical load. The body requires rest. The body is not able to take more load consistently," he said.

"It was becoming an effort to continue training. Earlier, it used to be automatic," he explained.

Reflecting on his glorious career, Tendulkar said being part of the 2011 World Cup winning team was the best moment of his journey.

"When we won the World Cup two years ago. I had to wait 22 years for it, that has to be a special moment. Yesterday, the way people responded, I don't know how to react to that, I want to say a big 'thank you' to everyone, so that was also special," he said.

Asked about the most disappointing moment of his career, Tendulkar said, "The 2003 World Cup, we reached the final, we were playing so well, but we couldn't cross the final hurdle."

Tendulkar went on to elaborate on what he went through emotionally yesterday.

"It was an emotional moment, I remember when I was thinking about retirement I don't think I was very emotional because I knew it was the right decision even though my family was," he said.

"I became emotional with the way players gave me a send off, when I was talking to the wicket. Normally I am not very emotional because I knew it was the right decision. The thought that I won't be able to represent India again made me emotional," he added.

Tendulkar, who delivered a moving farewell speech which left many with moist eyes yesterday, said the emotions were getting the better of him all through.

"The first moment when I went on the wicket and stood between the 22 yards, I realised this was the last time I was in front of a packed stadium as part of the Indian team. That made me quite emotional, that I wouldn't have a bat in my hand, playing for India," he said.

"While I walked back to the dressing room, I didn't look up when shaking hands with many of the West Indies team members, because I was in tears," he added.

Tendulkar said he faced several challenges during his career, including injury breakdowns which left him in doubt about his future.

"For 24 years to play cricket for country was the most important thing for me. In these years, I faced several challenges but the desire to play for the country was so strong, that I found solutions to these challenges.

"Injuries are tough to deal with, I had different injuries. To overcome them and to play again was not easy. There were different goals to attain. Like my tennis elbow, which took more than four months to recover.

"The challenges were tough, sometimes I had the feeling that I may never be able to pick the bat again. There was a time when I was not even able to pick (his son) Arjun's plastic bat. I thought I will not be able to play anymore. That was a different kind of pressure. It was a difficult phase in my life," he recollected.

But no matter the challenges, Tendulkar said cricket never left his existence and it won't leave him even post-retirement.

"Even though physically I am not playing for India, in my heart I will always play and pray for India. Whether I am part of the team, it really doesn't matter," he said.

The other most important aspect of his life has been his mother Rajni and Tendulkar said he felt quite happy to have her in the stands for his farewell Test.

"I requested BCCI to keep my last match in Mumbai because my mother had never seen me play. I wanted that to be a surprise for her. But then she got to know of it through media. This match became really special for me," he said.