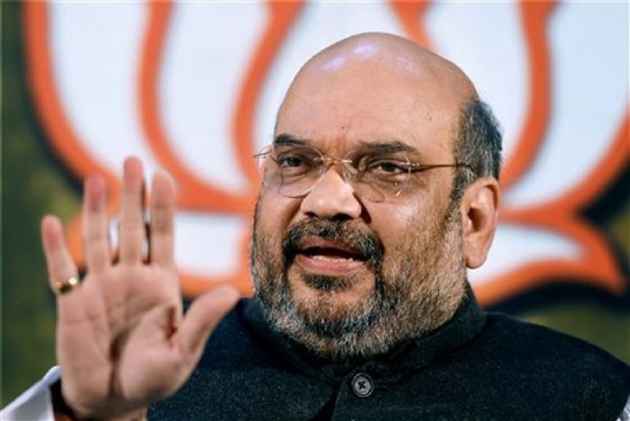 BJP president Amit Shah on Friday, patted the Manohar Lal Khattar government in the state claiming it was providing a corruption-free administration and also lauded its teachers' transfer policy.

"The present Haryana government has tried to give a transparent administration. Earlier, in Haryana, governments used to be either of a particular family or caste. Since long, people of Haryana had not experienced a government which they could feel was their own. For the first time, after Manohar Lal became chief minister, people are experiencing that this government represents all," Shah said addressing a press conference here.

He claimed that an end has been put to the earlier practice where recruitments were made on the basis of favouritism and now jobs were given in a transparent manner and on merit.

He cited recruitments in Haryana police, Haryana civil service, revenue, irrigation departments and those of teachers, saying all these were made in a transparent manner.

Asked that some party legislators had been sulking, Shah said that there would be no change of leadership in the state.

"I have interacted with all BJP MLAs from the state and they have unanimously agreed that the government is doing well under the leadership of the Chief Minister Manohar Lal. Party workers also believe that development works undertaken in Haryana were never taken up by any previous government," Shah said.

Asked will the next state assembly elections be fought under Khattar's leadership, Shah said, "Manohar Lal will continue to lead the state till next elections."

Asked who will be BJP's face in upcoming polls in Himachal Pradesh, Shah said, the party has not decided whether they will contest polls projecting a face.

To another question if BJP plans to strengthen its base in Rohtak region, considered as stronghold of the Jat community, Shah said, "a plan has been made to strengthen the party on each booth in the state...We do not believe in castes. Party will be strengthened everywhere in Haryana."

He said the Khattar government needs to be given credit for doing good work which has helped improve the state's sex ratio, which has reached 950.

Shah said the state government has given a gift to people of Haryana in the state's golden jubilee year by making state as kerosene-free, even as scope of corruption has been eliminated by fully computerising the Public Distribution System.

"The Haryana government has also made efforts to ensure that water reaches tail ends of every field," he said, adding a number of steps have also been taken to ensure women's security.

On the SYL issue, he said, "It is right that Centre has tried by engaging both states (on this issue) once and will again do so."

Asked that some party workers have complained that bureaucrats were not listening to them, Shah said, "what is the views of workers about government is party's internal matter. There are several things. But all the workers agree that whatever work took place here was never done by any government."

To a query on what achievements of Haryana government will he like to talk about to replicate in other BJP ruled states, Shah said, "the policy adopted by Khattar government on transfers, I think not only BJP governments but also all state governments should implement it".

On Jat reservation issue, Shah said, "the party discussed this matter. The government is pursuing this case in the court (as the matter is before court)".

Shah arrived here yesterday on a three-day visit to Haryana.

With an eye on the 2019 Lok Sabha polls, Shah is travelling across states to strategise and find ways to strengthen the party at the grass-root level.