'It Is Important To Feel About Changes In One's Country': Gulzar At JLF 2017 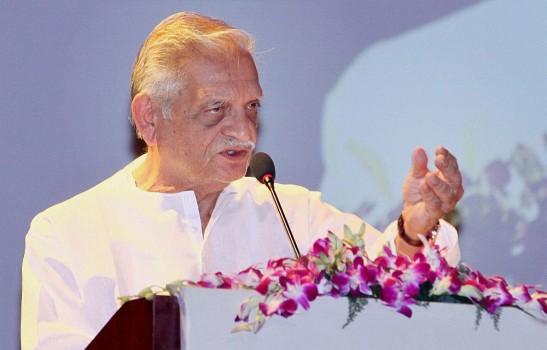 Eminent poet-lyricist Gulzar who has penned some of the most iconic Bollywood songs, today said one cannot remain immune to the happenings taking place in one's country and it is important for people to "think" and "feel" about the changes going around.

The poet was speaking at the launch of his new book titled "Suspected Poems", a collection of poetry that he said, "does not bite but only bark".

The book is about the scathing commentary on the political class of India, and touches upon a wide array of topics ranging from tattoos, newspapers, political rallies, Dalits, besides a poem on late writer M M Kalburgi, which Gulzar, 82, said "penetrates" him whenever he goes through it.

"We must think about our country, our nation and about its environment... You have to feel what is going around and it is my duty to inform you," Gulzar said.

The octogenarian's latest poems are an expression of what goes on inside his mind, and he said, it was his "bounden-duty" to share it with his readers.

Talking about the verse he penned on Kalburgi, he said that the rationalist's death was not just physical, but also the death of an ideology which has been the defining feature of independent India.

Member of Parliament Pavan K Varma, who has translated Gulzar's book into English said that the job was "taxing", particularly because the poems were laced with chuckle-inducing humour and acid observations on the changes taking place in contemporary India.

"It's always a taxing job to translate Gulzar's poetry. Even the English dictionaries don't have an answer. How does one translate 'Buddee Buddee karta hai yeh budda darya'?" Varma asked.

Calling the book "unique" for its calibrated commentary on the current evolving trends in the country, he said the work was not merely a simplistic rhetorical narrative, but one aimed to "inspire" and "provoke".

Commenting on the title of the book, Gulzar said he has always had a knack for suspecting the roots of a poem.

"I always suspect the genesis of a poem. I always believe there is another poem behind a poem," Gulzar said.