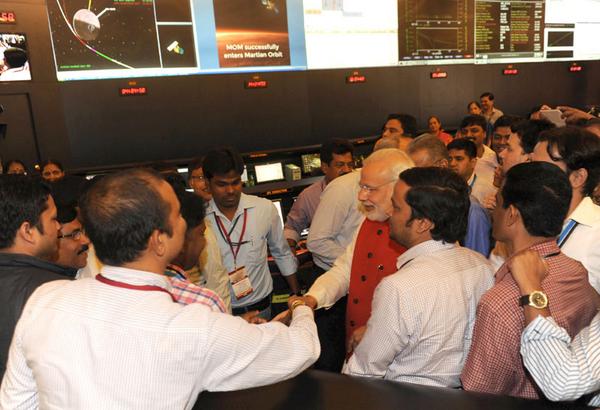 Indian Space Research Organisation has successfully realigned the orbit of its Mars Orbiter Mission 'Mangalyaan' so it is not affected by long-duration eclipse, ISRO Chairman A S Kiran Kumar said today.

"On the evening of January 17, we manoeuvred to change the orbit of Mangalyaan and reduced the duration of eclipse," Kumar told reporters here on sidelines of Gujarat Technological University's convocation.

"The experiment was successful. The spacecraft still has 30 kg fuel left, and with realignment we expect it to work for a very long time to come," he said.

The correction in the trajectory of Mangalyaan was required to keep the power supply strong during the eclipse - caused by shadow of Mars falling on it for 7-8 hours - so that it could continue to function longer, as Mangalyaan's battery cannot support long-duration eclipse.

Kumar also said work on ISRO's ambitious South Asia satellite project has begun. The satellite is expected to be launched by March this year, he said.

He also informed that work on 'Chandrayaan II' has begun and the satellite is expected to be launched in the first half of 2018.

"Experiment works on Chandrayaan II are on. We are testing soft landing engines at Mahendragiri and a place in Karnataka by simulating lunar surface. We plan to launch it in the first half of 2018," he said.

Kumar was the chief guest at the 6th convocation of Gujarat Technological University where a total 87,258 students were conferred degrees in different streams of engineering, pharmacy, business administration, computer application, hotel management, among others.