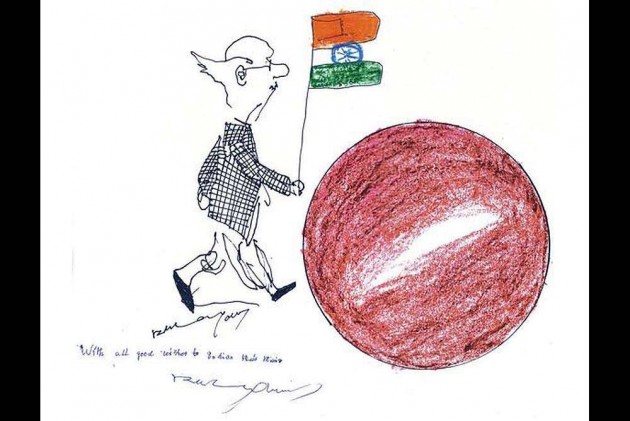 Print
A
A
A
increase text size
Outlook January 27, 2015 16:17 IST ISRO Pays Tribute to Laxman Who Drew His Last Cartoons for It

Indian Space Research Organisation today paid its tributes to iconic cartoonist R K Laxman by posting online his cartoon 'common man' reaching Mars, the last of his works, which he had sent to the space agency after the success of the historic Mars Mission.

"Tribute to the Legendary Cartoonist R K Laxman. His 'common man' reaching Mars. R K Laxman sent this delightful gift to ISRO a couple of weeks back," ISRO said in a post on its Facebook page with the cartoon.

"When I visited him in Pune in December, I requested him to draw me a cartoon for ISRO as we were about to complete 100 days of Mars Mission on January 1. Though he was not in the best of his health I gathered courage to make this request," S Arunan, Project Director, Mars Orbiter Mission, told PTI.

He said, "His family promised to send me a cartoon in a few days, and on December 26 I received three cartoons from him. I didn't expect that those will be his last cartoons. He is some one I admired a lot."

India made space history on September 24 when its low-cost Mars spacecraft was successfully placed in orbit around the red planet in its very first attempt, breaking into an elite club of three nations.

The Rs 450-crore MOM Mangalyaan is the cheapest inter-planetary mission that, at just USD 74 million, cost less than the estimated USD 100 million budget of the sci-fi blockbuster Gravity and a tenth of NASA's Mars mission Maven that entered the Martian orbit on September 22.

European, American and Russian probes have managed to orbit or land on the planet, but after several attempts.

Laxman, who immortalised the hapless 'Common Man' with his swipes at politicians but without malice, died in Pune yesterday.