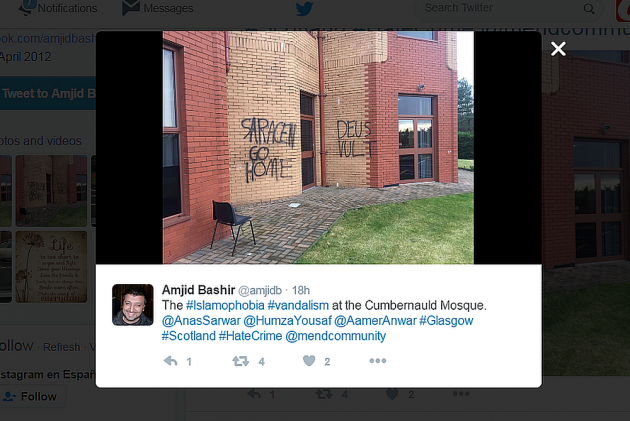 Some unidentified vandals have spray painted a mosque in Scotland with anti-Muslim slogans, prompting police to probe the incident as a "hate crime".

The disturbing graffiti was scrawled on the Cumbernauld mosque situated at Craighalbert Way in Glasgow, Scotland.

The photos of the mosque with racist graffiti on its walls were shared in a series of tweets by Amjid Bashir, who identifies himself as a social media and marketing expert, Community campaigner and Entrepreneur in the UK.

"Cumbernauld Mosque has been vandalised with #Islamophobia #graffiti on the walls," he said in a tweet.

His tweet was retweeted by anti-Islamophobia organisation Tell Mama.

On one wall of the mosque, vandals spray painted "SARACEN GO HOME", while next to it "DEUS VULT", Metro.Co.Uk reported.

"Deus vult" is classical Latin for "God wills it", and was a term people used after Pope Urban II declared the First Crusade – primarily as a rallying cry to defend the Byzantine empire from the Seljuk Turks. Saracen was another term used in the Crusades, referring to Muslims, the report it said.

Meanwhile, Tell Mama said, "Given the language and the imagery being conjured up, we believe that the individual who did this is ideologically driven and may well be radicalised by extremist far-right rhetoric, which regularly plays on imagery and text from the Crusades, as though there is a clash of civilisations taking place".

A spokeswoman for Police Scotland said that the vandalism is being treated as a hate crime, the report said.

"I can confirm that an investigation is underway following an act of vandalism. Inquiries are continuing. This incident is being treated as a hate crime and hate crime remains a priority for Police Scotland.

"We work closely with our criminal justice partners to do everything in our power to protect all communities and eradicate all forms of hatred," the spokesman said.

Continue FREE with Ads Pay Rs. 1 to Read Without Ads
READ MORE IN:
International
Next Story : Bollywood 2016: When Cinema Got Real
Download the Outlook ​Magazines App. Six magazines, wherever you go! Play Store and App Store