ISIS On The Run, Will Soon Be Wiped Out: Trump 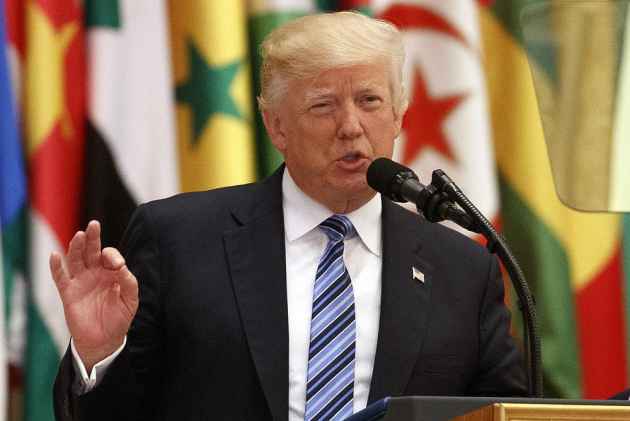 President Donald Trump said today that the Islamic State was "on the run" and will soon be "wiped out" of Syria and Iraq, days after the Iraqi forces with the help of the US-led international coalition re-took Mosul from the terror group.

Iraq has declared victory over the ISIS (another name for the Islamic State) in Mosul, retaking full control of the country's second-largest city three years after it was seized by the terror group.

"ISIS is on the run and will soon be wiped out of Syria and Iraq, illegal border crossings are way down (75 per cent) and MS 13 (Mara Salvatrucha) gangs are being removed," Trump tweeted.

The US President had yesterday spoken with Iraqi Prime Minister Haider al-Abadi and congratulated him on "the liberation of Mosul" by Iraqi security forces.

He said that the development marked a major milestone in the fight against ISIS.

"The President praised the heroism of the Iraqi and American soldiers and underscored his commitment to the total defeat of ISIS," the White House said in a statement.

"He stressed the need to consolidate gains to prevent ISIS or any other terrorist group from returning to liberated areas," it said.

Commander of US forces in Iraq Lt Gen Stephen Townsend told Pentagon reporters that the ISIS has lost its capital in Iraq and the largest population centre they held anywhere in the world.

"Iraqi militia forces, Kurdish Peshmerga fighters, and the global coalition also deserve a share of the credit for their sacrifices to achieve this hard-won victory," he said.

"Make no mistake, this victory alone does not eliminate ISIS, and there's still tough fighting ahead. There are still pockets of resistance in Mosul, hold-outs, and hidden IEDs that will take weeks to clear, as well as remaining ISIS enclaves in Hawija and western Anbar," Townsend said.

There are also humanitarian and stabilisation efforts desperately needed to ease the suffering of Mosul citizens and start the city on the road to recovery, he said.

Though the Moslawis have suffered greatly, the east side is already springing back to life less than six months after its liberation. And Moslawis have already started to return to their neighborhoods in the west.

"But still, the loss of one of the twin capitals and a jewel of their so-called caliphate is a decisive blow to ISIS and certainly something for the Iraqis to celebrate. They can also celebrate the remarkable turnaround their security forces have made in the course of the past three years," Townsend said.

However, he said that there was still no news about the ISIS leader Abu Bakr al-Baghdadi.

"There's been a lot of media interest in the whereabouts and status of ISIS leader Abu Bakr al-Baghdadi. Despite all the helpful reports to us from every source imaginable, I'm unable to confirm or deny where he is or whether he is alive or dead. Let me just say for the record, my fervent hope is it is the latter," he said.

ISIS is an evil enemy who will resort to any lengths to maintain their hold on the territory they claim as their caliphate, Townsend said.

"But make no mistake, it is a losing cause. Our partners in the international coalition against ISIS will stand side by side against ISIS until they're defeated in both Iraq and Syria," Townsend asserted.