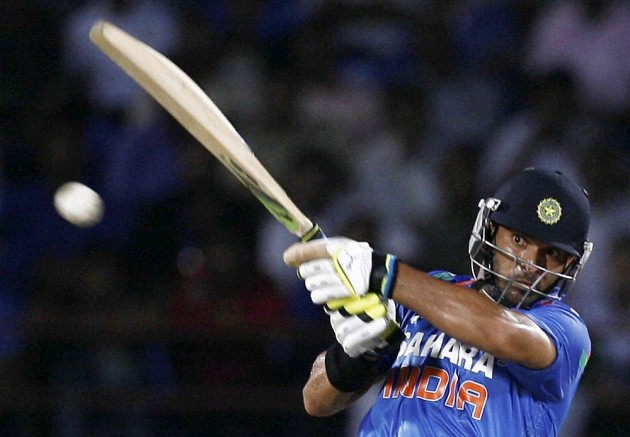 Flamboyant all-rounder Yuvraj Singh was the surprise recipient of a windfall at the IPL players' auction, fetching a record bid of Rs 14 crore from the Royal Challengers Bangalore while Dinesh Karthik also clinched a mind-boggling Rs 12.5 crore purse from Delhi Daredevils here today.

Both Yuvraj and Karthik, who are not even regular members of the Indian team, triggered stunning bidding wars among the franchises to set a new record in earnings in the cash-rich league. They surpassed the Rs 11.04 crore that was bid on Gautam Gambhir in 2011, the highest till now.

Upcoming New Zealand all-rounder Corey Anderson, who scored the fastest ODI century smashing a 36-ball ton to breach the record set by Shahid Afridi in 1996, expectedly got a decent package of Rs 4.5 crore with the Mumbai Indians though there was strong buzz of him emerging as the highest paid from this auction.

"It's a grand affair and every edition IPL has grown bigger. The seventh edition would be no exception, it will be grander and more entertaining for fans and franchises," IPL Chairman Ranjib Biswal said before the start of the star-studded auction where Bollywood actors and business tycoons were present.

Yuvraj, a cancer survivor, fetching such a huge price tag came as a massive surprise since the left-hander is no longer in the ODI team due to poor form though he was picked in the squad for the World Twenty20 Championship in Bangladesh.

"The team is looking stronger with him," said RCB co-owner Vijay Mallya even though he admitted that he ended up paying Rs 4 crore more than what he had planned.

Similar was the case of Karthik, who does not figure in the Indian team, but generated immense interest among the franchises.

At a base price of Rs 2 crore, there was a bidding war between Delhi and Hyderabad for him before KKR also jumped into the fray. But Delhi seemed persistent and in the end, outbid the other two contenders.

The 33-year-old Pietersen was always expected to be a hot pick given that he would be available all through the season post his forced retirement from international cricket.

So it came as no surprise that his name triggered a three-way bidding between CSK, KXIP and Delhi. The player eventually went to Delhi, who exercised the 'Right to Match' provision to grab him being his former employers.

Kallis was taken by KKR through the same provision after initial bidding war between CSK and Delhi.

Veteran Indian opener Virender Sehwag (base price Rs 2 crore), who had been released by Delhi, went to Kings XI Punjab for Rs 3.2 crore. The India discard's name was all set to be hammered in as unsold before Punjab bought his services fending off bids from Mumbai Indians.