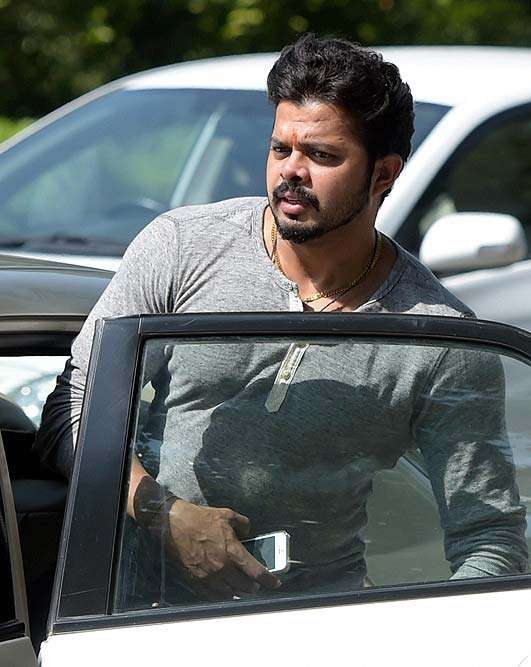 outlookindia.com
-0001-11-30T00:00:00+0553
In a slap to Delhi police, a court here today discharged all accused including India's test discard S Sreesanth and two other cricketers Ajit Chandila and Ankeet Chavan, in the sensational 2013 IPL-6 spot-fixing case, saying it failed to gather "all necessary ingredients to establish a prima facie case" under stringent MCOCA.
The court, which dropped all charges against 36 accused, held that the Special Cell of Delhi Police has been unable to establish any "nexus" or link between accused and crime syndicate allegedly run by underworld don Dawood Ibrahim and his close aid Chhota Shakeel who have been declared as proclaimed offenders in the case along with one Sandeep.
Three other accused -- Javed Chutani, Salman and Ehteysham -- were Pakistani nationals and never came in the hands of the police.
In his 175-page order, Additional Sessions Judge Neena Bansal Krishna said "...It can be concluded that even if entire evidence of prosecution is accepted, then too it is not established that there exists a core crime syndicate of Dawood-Chhota Shakeel who have been indulging in the organized offence of betting and match fixing and also dealing with money so generated through hawala."
Besides three cricketers who were the part of IPL team Rajasthan Royals and banned for life for their alleged involvement in crime, several bookies among 36 were named in the 6000-page chargesheet in which police had claimed to have unearthed sufficient evidence to prosecute them for the offence punishable under section 120 B (conspiracy) read with 419 (cheating by personation), 420 (cheating) of IPC and under the provisions the stringent MCOCA.
However, the judge said, "in the given situation, bound as this court is with the law of the land, it is contrained to conclude that no prima facie case under MCOCA or any other Penal statute is disclosed against any of the accused persons, who are all entitled to be discharged."
"The prosecution has not been able to establish that there is any continuing unlawful activity of crime syndicate as it has not been able to meet the requirement of there being more than one FIR in preceding 10 years against the syndicate," the court said.
Further, it said "no nexus or link between various accused" with Dawood's alleged Pakistan-based aide Dr Javed Chutani "as part of organized group has been established."
"Also, the offence in relation to which MCOCA is sought to be invoked, pertains to betting and match fixing, which as discussed above does not fit in any Penal statute. All the necessary ingredients to establish a prima facie case under the provisions of MCOCA is not made out," the court said.
Castigating Delhi Police for involing MCOCA, the court said, "the best case could have been under public Gambling Act, but that also is not prima facie established from the evidence placed on record by the prosecution."
"The offence of cheating is also not made out prima facie, even if the entire evidence of prosecution is admitted without formal proof," the court added. More
The court said, "in view of the huge vacuum of law in this regard it is helpless to proceed further under any of the penal statutes."
However, it questioned the probe of the Delhi Police saying that there was a need to examine whether those arrested along with cricketers were alleged bookies and conduit in the crime.
"The crime in regard to which MCOCA was sought to be invoked is of betting and match fixing. Though, as discussed above the offence of MCOCA is not made out, it still needs to be examined if the accused persons who are alleged to be bookies and their associates and conduits be considered to have committed any offence under Public Gambling Act," the court said.
Further, the court said even if it is accepted that there was rampant betting going on in the IPL­6, "it is an activity excluded under section 12 of Public Gambling Act, and is not an offence for which any of the accused can be held liable."
The Special Cell of Delhi Police had a word of praise only for exposing the conduct of players, bookies, conduits etc and highlighting the contamination that has crept up in the game of cricket which requires skill and strategic masterminds.
"Having concluded that the acts of gambling in the nature of betting and match fixing are not covered by any statutory provisions of any penal code, it would still be worth the while to note that the efforts of Special Cell have brought to the fore the contamination which has crept in the sports especially in commercial sports like IPL," the court said.
"It has exposed the conduct not only of the players, but also of the so called bookies and conduits who have been connected in this big game of money through match fixing and betting.
"But, in view of the huge vacuum of law in this regard and in the realm of law, this Court is helpless to proceed further under any of the penal statutes," the court said.
Continue FREE with Ads Pay Rs. 1 to Read Without Ads
READ MORE IN:
S. Sree Santh Sports
Next Story : Rape Convictions Can Rest on Victim's Testimony: HC
Download the Outlook ​Magazines App. Six magazines, wherever you go! Play Store and App Store