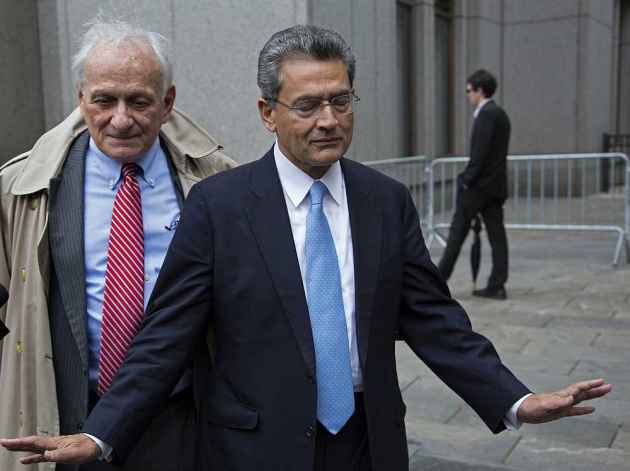 outlookindia.com
-0001-11-30T00:00:00+0553
India-born former Goldman Sachs director Rajat Gupta won a major reprieve after an appeals court here granted his request to stay out of prison on a USD 10 million-bond while he fights his conviction on insider trading charges.

64-year-old Gupta, who was to begin his two-year prison term on January 8, had filed an appeal in the US Second Circuit Court of Appeals seeking stay of his surrender to prison and to remain free on a 10-million-dollar bond while he challenges his conviction.

A two-judge panel ruled in Gupta's favour at a hearing yesterday, saying "it is hereby ordered that the conditions of release imposed by the district court will be continued.

"Motion is granted," US Circuit Judge Jose Cabranes said in the ruling, allowing Gupta's motion to stay his surrender date and remain free on bond.

The court is expected to hear Gupta's appeal around April next year and it could be a year before his request to overturn his conviction is ruled upon.

The bail conditions imposed by the district court since Gupta's arrest in October last year include the 10 million dollar-bond, surrender of his passports and travel restrictions.

The ruling comes as a major relief for Gupta, who is one of the most high-profile Wall Street executives to be charged with passing confidential boardroom information about Goldman Sachs to his friend and business associate, hedge fund founder Raj Rajaratnam, who prosecutors allege made millions of dollars in profit and avoided huge losses thanks to Gupta's tips.

Gupta was accompanied by his wife Anita and their four daughters at the hearing.

After the decision was announced, Gupta's wife burst into tears.

Judge Cabranes issued his ruling after consulting with US District Judge Reena Raggi, who was also on the panel.

The former McKinsey head was convicted by a jury in June on one count of conspiracy and three counts of securities fraud.

US District judge Jed Rakoff had in October sentenced Gupta to two years in prison and slapped a five million-dollar fine on him.

Gupta and his lawyers Seth Waxman and Gary Naftalis declined to comment on yesterday's ruling.

The office of Manhattan's top federal prosecutor, India-born Preet Bharara, who had brought the insider trading charges against Gupta, also declined to comment on the appeals court's ruling.

In court papers, Gupta's lawyers have argued that the district court, which convicted Gupta, erred in allowing at the trial an October 24, 2008 wiretapped conversation between Rajaratnam and David Lau, a Singapore-based portfolio manager at Galleon, and a September 24 conversation with his trader Ian Horowitz.

In the October call, Rajaratnam told Lau that he "heard yesterday from somebody who is on the board of Goldman Sachs, that they are going to lose two dollars per share."

Gupta's lawyers said there was no evidence that Lau had ever traded in Goldman stock. They also say that Gupta was never a participant in these calls.

The "October 24 wiretap, which contained the only direct suggestion that Rajaratnam had a source on the Goldman board, coloured the jury's analysis of the wiretaps... Which were vague about the source and content of Rajaratnam's information."

Waxman also argued that the court erred by excluding as hearsay critical evidence that Gupta's eldest daughter Geetanjali could have provided at trial regarding Gupta's state of mind and about her father's deteriorating relationship with Rajaratnam.