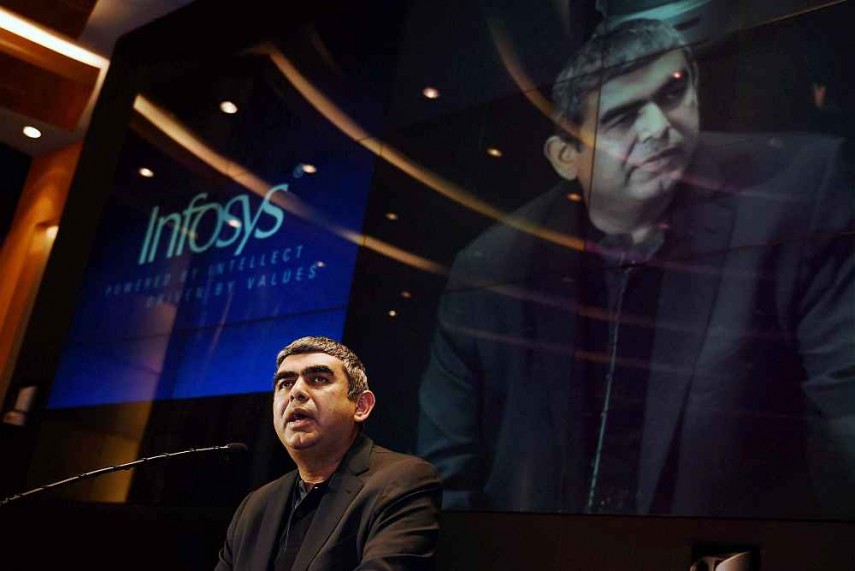 India's second-largest IT company Infosys today posted 6.1 per cent rise in net profit at Rs 3,606 crore for the July-September quarter but disappointed the market with a cut in its annual sales growth outlook.

The lowering of guidance by Infosys -- second time in three months -- came a day after its larger rival Tata Consultancy Services posted a muted set of numbers at a time when the industry is facing "uncertain business environment" and softness in banking and financial services.

The city-based company lowered its sales growth forecast to 7.5-8.5 per cent in US dollar terms for this fiscal from earlier estimate of 10 per cent announced in July.

The downgrade disappointed the market as Infosys shares closed with losses of 2.34 per cent on BSE, wiping out Rs 5,662 crore from shareholders wealth.

Infosys' in July too had lowered revenue growth forecast to 10 per cent from up to 11.5 per cent projected in April.

In constant currency, revenue is now expected to grow 8-9 per cent this fiscal for Infosys -- much below industry body Nasscom's growth estimates of 10-12 per cent for 2016-17.

"While we continue to navigate an uncertain external environment, we remain focused on executing our strategy and increasing momentum of our software plus services model. Considering our performance in the first half of the year and the near-term uncertain business outlook, we are revising our revenue guidance," Infosys CEO Vishal Sikka said.

"Overall, Infosys has delivered a good Q2, however the downward revision in FY17 guidance implies a weaker H2 than earlier anticipated. Infosys results are better than TCS and even though outlook is muted, company is likely to out-grow TCS in FY17 constant currency revenue terms," stock broker Prabhudas Lilladher said in a note.

"Infosys reported results in-line with our expectations. Despite a strong quarter, the guidance has been curtailed, which we believe is steeper than expectations," said Rahul Jain, Vice President – Research at Systematix Shares & Stocks.

The impending US presidential elections and implications of Britain's exit from the European Union have slowed growth in the banking and financial services sectors.

Infosys' smaller rivals, Wipro and HCL, will announce their results on October 21.

Sikka conceded that factors like RBS and other client rampdowns affect near-term performance.

"In addition, internally we have a couple of service lines where we are setting in to see a slower progress along the transformation that we need to achieve. In particular consulting and BPO," he added.

Sikka said in the long term, it's increasingly clear that the IT industry's future lies in evolving from a cost-based, people-only model, to one in which people are amplified by software and artificial intelligence (AI).

Sikka said the company will stick to its aspiration of achieving USD 20 billion revenue by 2020.

"Our margins expanded during the quarter on the back of further improvement in operational efficiency. Operating cash flows for the quarter were healthy and we effectively navigated a volatile currency environment through prudent hedging," Infosys CFO MD Ranganath said.

Downplaying impact of Brexit, global macro economic uncertainties and US elections, Sikka said: "I think we always tend to overstate the impact of these things."

"Sometimes in some areas like oil prices or Brexit or this kind of things can have some impact, but the bigger structural issues that is impacting all of our clients in our industry is the nature of computing the nature of digital," he added.

Liquid assets, including cash and cash equivalents, available-for-sale financial assets and government bonds, were Rs 35,640 crore in the quarter under review compared with Rs 33,212 crore as on June 30, 2016.

Infosys has also declared an interim dividend of Rs 11 per equity share.

Sikka said the company is evolving towards a 'people-plus- software' model from the traditional vanilla 'people-only' model.

He added that 18 months ago, Infosys embarked on a setting up a 'single, defragmented delivery organisation' and creating leadership with agility to be able to respond to market needs.

"So I am quite satisfied with the results and beyond the quarterly results, I am quite happy with the progress we are making on reinventing our future," Sikka said.

Infosys has also revised the pay packages of its top leadership, including Chief Operating Officer U B Pravin Rao and Chief Financial Officer M D Ranganath.

Besides, it has inducted founder and CEO of Surya Software Systems D N Prahlad as an independent director on its Board, effective October 14, 2016.

Continue FREE with Ads Pay Rs. 1 to Read Without Ads
READ MORE IN:
Business
Next Story : No Libel, No Retraction, No Apology for Trump Story: New York Times
Download the Outlook ​Magazines App. Six magazines, wherever you go! Play Store and App Store