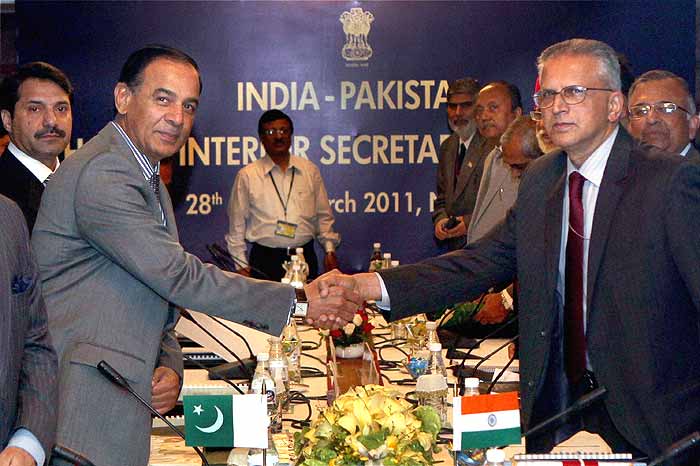 outlookindia.com
-0001-11-30T00:00:00+0553
Resuming the bilateral dialogue process after a gap of over two years, Home Secretaries of India and Pakistan today said "progress" has been made on certain issues and termed the talks as "extremely positive".

"Talks are extremely positive. Progress made in certain direction, in the right direction," Home Secretary G K Pillai told reporters at the end of the first day of the two-day talks with his Pakistani counterpart Chaudhary Qamar Zaman.

Zaman, who is leading a 12-member delegation, also said talks were "very positive".

"Since, we have another day for the talks to still follow through, I am not going into the specifics at the moment. But I can tell you with good amount of certainty that its been a very positive attitude displayed on both sides and I am really confident about tomorrow's proceedings also," he said.

He went on to say that there were issues that were yet to be discussed. "We have issues that still we have to discuss. It has been generally moving on in a good spirit and it has been a result-oriented meeting."

Senior Indian officials said the talks were substantive and "some substantive decisions were taken" but refused to elaborate.

"All matters of mutual concern were discussed," the officials said on being asked India had voiced its concern over the slow pace of trial in Pakistan against the 26/11 accused.

A joint statement will be issued by midday tomorrow, Pillai said.

The statement is expected to outline the resolve of the two countries to combat terrorism and may also come up with steps to enhance people-to-people contacts, including an easier and faster visa regime.

Both sides are keen to set a positive tone for the meeting between Prime Minister Manmohan Singh and his Pakistani counterpart Yousuf Raza Gilani in Mohali when the two leaders witness Wednesday's India-Pakistan World Cup cricket semi-final clash.

The parleys held at the 'Friendship Lounge' in Ashok Hotel stretched to over five hours with a working lunch.

Officials of investigative agencies of both the countries also held separate informal talks.

While the Indian side sought to know the progress in the 26/11 case, the Pakistan delegation raised the issue of 2007 Samjhauta Express blast and wanted to the action taken to nail the culprits.

Among the 68 casualties in the blast in the train, which runs between India and Pakistan, the maximum were from Pakistan.

The talks marked the resumption of high-level discussions on all issues, more than two years after the composite dialogue process was suspended in the wake of the November, 2008 Mumbai terror attacks.

Incidentally when Mumbai was being attacked by Lashker-e-Taiba terrorists, the then Union Home Secretary Madhukar Gupta was in Islamabad for the last Home Secretary level talks.

During the deliberations, the Indian side assisted by officials from security agencies also discussed cross-border terrorism, smuggling of narcotics and flow of counterfeit currency.