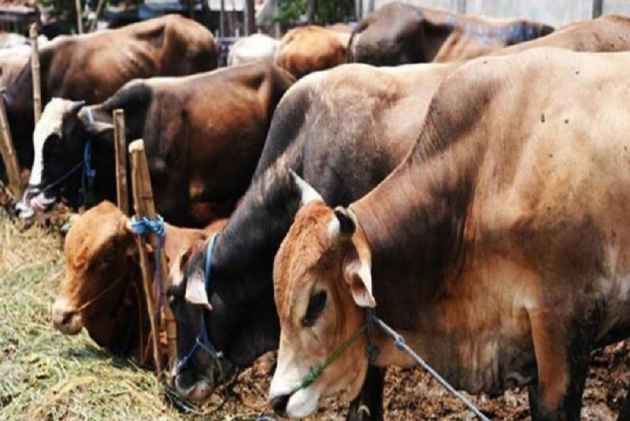 Cow slaughter was as contentious an issue half-a-century ago as it is today, with an "attack" on Parliament by saffron-robed sadhus prompting the then Prime Minister Indira Gandhi to constitute a committee that included RSS chief M S Golwalkar to examine a national law to ban it.

A new book on Gandhi by senior Congress leader and family loyalist Jairam Ramesh narrates how Golwalkar, who remained the supreme leader of the RSS for over 30 years, was nominated to the panel to defuse the "crisis" following the attack by sadhus on Parliament on November 7, 1966.

The committee, which included important Hindu religious leaders, including the Shankaracharyas, remained in existence for 12 years but did not submit a report.

"On June 29, Indira Gandhi set up a high-power committee to examine the entire issue of a national law to ban cow slaughter. It was headed by A K Sarkar, a former chief justice of India and had as its members experts like Dr V Kurien.

"The high-power committee was given six months to submit its report...It was to keep meeting for 12 years till it was disbanded by Indira Gandhi's successor in 1979. The committee never submitted its report," Ramesh says in the book.

"The first crisis she faced in November 1966 was on the cow when sadhus attacked Parliament, people died, and the home minister resigned.

"She set up a committee to look into the issue of a national ban on cow slaughter. One of the important members on this committee was M S Golwalkar, besides the Shankaracharyas, to defuse the crisis," he said introducing the book- 'Indira Gandhi: A life in Nature' at a function here yesterday.

"7 November 1966 had seen the most unusual attack on Parliament. Thousands of sadhus – many clad in saffron robes, others naked – staged an assault demanding a national law to ban cow slaughter immediately.

"Police had to resort to firing and a few of the protesters were killed. Indira Gandhi quickly secured the resignation of Home Minister Gulzarilal Nanda, who was widely seen to be sympathetic to the agitationists," notes the book published by Simon and Schuster for release in the birth centenary year of Indira Gandhi which Congress is celebrating.

Continue FREE with Ads Pay Rs. 1 to Read Without Ads
READ MORE IN:
Indira Gandhi National
Next Story : CM Adityanath's Plan To Make UP Roads Pothole-Free By June 15 Will Take Up To Two Months More
Download the Outlook ​Magazines App. Six magazines, wherever you go! Play Store and App Store