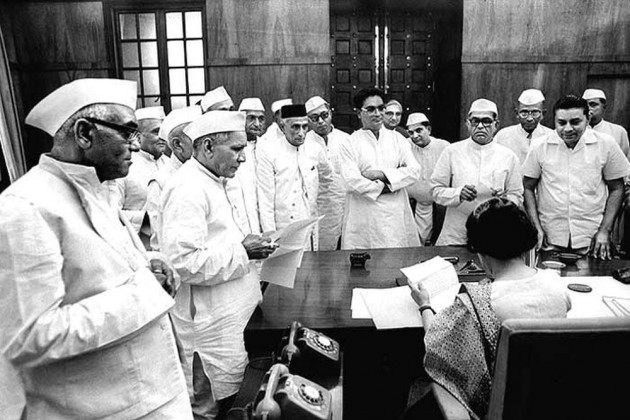 Print
A
A
A
increase text size
Outlook May 14, 2017 09:54 IST Indira Gandhi Most Acceptable PM Of A Democratic Country, Even Today, Says President Mukherjee

Describing Indira Gandhi as the "most acceptable" prime minister of a democratic country till today, President Pranab Mukherjee recalled her decisiveness while giving a subtle message to the present Congress leadership.

Mukherjee, in a veiled message to the party leadership to speed up decision-making in organisational matters, recalled the former prime minister's decisive style of functioning that helped her party score comeback victories in state elections within a couple of months after the second Congress split of 1978.

"She was one of the remarkable personalities of the 20th century all over the world. And to the people of India, even today after her passing away, she is the most acceptable ruler or prime minister of a democratic country. Even today," he said, evoking a thunderous applause from the audience that comprised a galaxy of top Congress leaders.

"The Congress was defeated in 1977. I was a junior minister. She told me, 'Pranab, don't get unnerved by the defeat. This is the time to act.' And, she acted!" Mukherjee recalled.

With Congress vice president Rahul Gandhi seated on the dais, flanked by Vice President Hamid Ansari and former prime minister Manmohan Singh, Mukherjee paid rich tributes to Indira Gandhi on the occasion of the release of a commemorative centennial volume on her life and works.

He also received the first copy of 'India's Indira - A Centennial Tribute' that was unveiled by Ansari. The Congress is celebrating the birth centenary of Indira Gandhi.

The book edited by senior Congress leader Anand Sharma is a compilation of life and work of Indira Gandhi and its foreword is written by Sonia Gandhi, who could not attend the function due to her ill health.

Reading out Sonia Gandhi's speech on her behalf, Rahul Gandhi said, "The brand of patriotism I saw in Indira Gandhi was a noble one that she imbibed from freedom struggle."

Sonia said Indira Gandhi -- her mother in law -- was a friend and a mentor and "she was careful not to impose her will on me".

Rahul, while quoting the Congress president said, "Indira Gandhi disregarded distinctions of rank, caste and creed. She had no time for snobbishness or ostentatious. She was quick to detect hypocrisy and insincerity. She was a proud Indian, but also a proud citizen of the world with a broad and tolerant outlook."

Recalling the second split in Congress in 1978, President Mukherjee said Indira Gandhi was elected party president on January 2, 1978 and in a matter of few days by January 20 she completed the formation of the working committee, set up the parliamentary board, PCCs and AICC structures and prepared the party to face elections to state assemblies of Maharashtra, Andhra Pradesh, Karnataka, Assam, and NEFA.

Soon after that, he said, she led the Congress to a decisive victory by two-thirds majority in Andhra Pradesh and Karnataka and went on to make her party the single-largest in Maharashtra where it formed the government along with the breakaway faction of the Congress.

Mukherjee said by the difference between January 2 and March 6, one can understand how quickly she had to take decisions and how decisively and determinately she took those decisions.

"I think, this is the characteristic of Indira Gandhi," he said, with Rahul Gandhi, her grandson, listening with rapt attention.

"Indiraji's response to the worst moments in her political life was to push herself into more action," he said, adding that in this centenary year, people will remember her for her various contributions.

The President also recalled a series of bold decisions the former prime minister took in the interest of the country, laying special emphasis to her decision to cleanse Golden Temple of militants, which he termed as the "most dangerous".

"As a student of history I was afraid to do anything with the Golden Temple. And as member of the then CCPA I told at the meeting that perhaps the most dangerous decisions we are taking," he said, referring to Operation Bluestar in 1984.

"Sometimes history demands some action which may not prove correct later on, but perhaps is most relevant at that time. This decision cannot be avoided," he said.

Mukherjee said the fearlessness in Gandhi's actions, she did not make an inch of change in her policy. He said Indira Gandhi played the second longest innings as prime minister of this country in her two terms.

He said her entire life was infused with a tremendous passion for India and its people.

"Fearlessness in action and boldness in decision making was the unique hallmark of Indiraji's character. Indiraji waged throughout her life a relentless war against communal and sectarian violence," he said.

He said she left a great legacy and during the almost 16 years as prime minister, India became the third largest reservoir of technical and scientific manpower, the sixth member of the nuclear club and then began the race for space science and technology.

"She proved that what she decides to do, she does not hesitate to have that," he said.

Ansari, in his brief address, said she lived in a period of turmoil and change in the country, the neighbourhood and the world and "Destiny bestowed on her the role of being a principle actor."

He said this volume is in the nature of "an offering" to her in her birth centennial year.

Former PM Manmohan Singh said, "Indira Gandhi was not just India's prime minister, but was also an acknowledged leader of the developing countries. She believed in world peace and her voice was heard with respect in the world fora."

He also said that history will remember with respect Indira Gandhi's sacrifice and her everlasting contribution. Singh also recalled her famous speech at Stockholm during the first Environment Summit, where she had said: "Poverty was the biggest polluter."