Vajpayee's confidant, who played a key role in foreign policy matters and pushed for deeper engagement with the US, dies a day before his 84th birthday 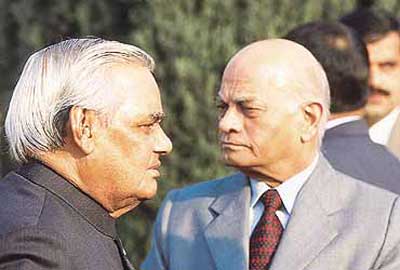 Mishra, who would have turned 84 tomorrow, was declared brought dead at the Fortis hospital in Vasant Kunj in south Delhi, at around 9.50 pm, hospital sources said.

He is survived by wife and a son and a daughter, both of whom reside abroad.

He was suffering from coronary artery problem for some time. He had asked his domestic help to bring his dinner but was found in an unconscious condition. The security guards were summoned and he was rushed to the hospital.

A career diplomat, Mishra was Principal Secretary to Prime Minister Atal Bihari Vajpayee before he was appointed NSA. He had earlier retired as Secretary in the External Affairs Ministry after having served as India's Permanent representative to the UN.

He had played a crucial role in assisting Vajpeyee during the Kargil conflict in 1999.

After the fall of the NDA government in 2004 and the fading away of Vajpayee from the political scene, Mishra distanced himself from BJP and often criticised its stand on various foreign policy issues.

He also batted for the Indo-US nuclear deal when Prime Minister Manmohan Singh was negotiating with Washington and attacked BJP for opposing it.

Believed to be the most powerful man in the PMO during Vajpayee's tenure, Mishra had also showed his dexterity as an able troubleshooter.

He had joined the BJP in 1991 only to quit it seven years later to become Vajpayee's Principal Secretary.

He played a key role on several issues relating to domestic and international policies, including forging closer ties with China and bringing thaw in Indo-Pak relations.

He was Special Representative for talks with China to expedite resolution of the vexed border problem.

From Pokhran-2 to Kashmir, and from Vajpayee's historic visit to Pakistan to engaging the US in a strategic dialogue, Mishra was the key figure in the country's foreign policy and security manoeuvres.

He was the son of Dwarka Prasad Mishra, a former chief minister of Madhya Pradesh, considered a staunch politician from the Congress and very close to Indira Gandhi.