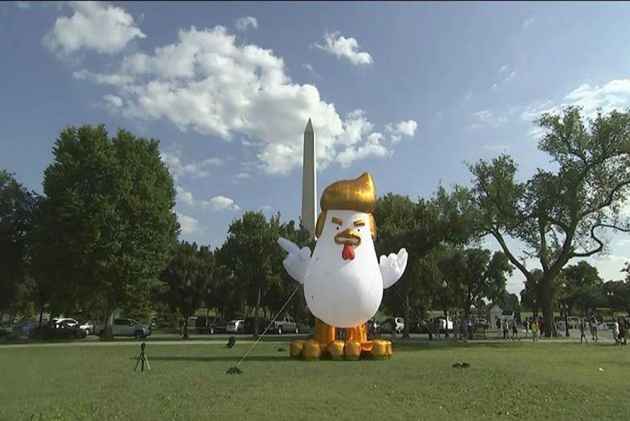 An Indian-origin activist has placed a giant inflatable chicken with a Donald Trump hair style near the White House to protest the president's stand on releasing his tax returns, dealing with North Korea and engaging with Russian President Vladimir Putin.

Taran Singh Brar, a documentary filmmaker, placed the "Chicken Don" in the lawn, just south of the White House and near the Washington Monument with due permission from the National Park Service and the Secret Service.

"The tallest thing they usually allow on the Ellipse is the national Christmas tree," he said. "They gave me a waiver for the 30-foot tall Chicken Don."

"Trump is too chicken to release his tax returns, to stand up to Putin," he told the local media.

"We are out here to criticise our president for being weak and ineffective as a leader and being too afraid to release his tax returns, too afraid to stand up to Putin and now engaged in a game of chicken with Kim Jong Un," Brar was quoted as saying by the Washington Examiner.

"Yet he wants a military parade in DC. It's all incongruous, and we are here to make fun of him for that," Brar said. According to whom the angry-looking chicken which has golden-orange hair and hand gestures in Trump's style is available for purchase on eBay for USD 1,500.

"Hey everybody! We are raising money to bring Chicken Don to the White House. Help the Chicken cross the road... Pennsylvania Avenue," he wrote on his fund raising post Chicken March.

"We think the coward squawking in the White House is too chicken to show his tax returns, too chicken to stand up to Putin, and too chicken to face the press. We've been inflating Chicken Don in his backyard so he knows no one is scared but him," Brar said.

Trump, however, has missed the chicken protest as he has been staying at his golf course in Bedminster, New Jersey.

"I realised it's actually better, because the symbolism works and the Secret Service won't be as jumpy," Brar said.