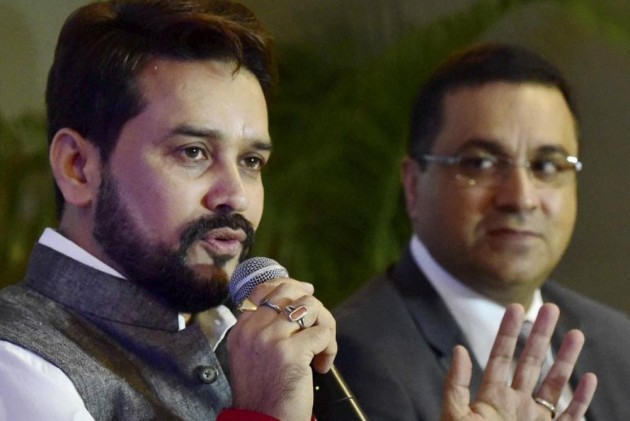 Anurag Thakur, who was today sacked as BCCI president for obstructing Lodha panel reforms, took a subtle dig at the Supreme Court's order saying that if the apex court feels the cricketing body will do well under the guidance of retired judges, "I wish them all the best".

Thakur and BCCI Secretary Ajay Shirke were shown the door by the country's top court after the body failed to comply with a July 18, 2015 verdict making the Lodha recommendations mandatory.

However, Thakur insisted that BCCI remains the best run sports body in India.

"For me it was not a personal battle, it was a battle for the autonomy of the sports body. I respect Supreme Court as any citizen should. If Supreme Court judges feel that BCCI could do better under retired judges, I wish them all the best. I am sure Indian cricket will do well under their guidance," said Thakur in a subtle dig.

He reacted to the Supreme Court order by putting up a video clip on social media.

"My commitment to the best of Indian cricket and autonomy of sports will always remain," he said.

Thakur was BCCI joint secretary and secretary before being elected president in May 2016. The BJP MP has also served as Himachal cricket boss for more than a decade.

"I had the honour of serving Indian cricket. Over the years, Indian cricket saw its best in terms of administration and development of the game. BCCI is the best managed sports organisation in the country with defined procedures. India has the best infrastructure built and maintained by state association with help of BCCI. India has more quality players than anywhere in the world.

Besides removing Thakur and Shirke from their positions, the Supreme Court today also initiated contempt proceedings against the sacked BCCI boss by seeking his response as to why he should not be held liable for obstructing the implementation of the Lodha reforms.

During the December 15, 2016 hearing, the apex court had threatened to initiate contempt and perjury proceedings against Thakur for asking the ICC CEO Dave Richardson for a letter but denying it on oath, warning he may have to go to jail if found guilty.

The court had reminded the BCCI top brass that Thakur as president of the board had asked for a letter from Richardson that the appointment of a CAG nominee in the cricket body would compromise with autonomy and amount to government interference.

Continue FREE with Ads Pay Rs. 1 to Read Without Ads
READ MORE IN:
Anurag Thakur R.M. Lodha Sports
Next Story : Trump To Repeal Many Of Obama's Actions On Day One
Download the Outlook ​Magazines App. Six magazines, wherever you go! Play Store and App Store