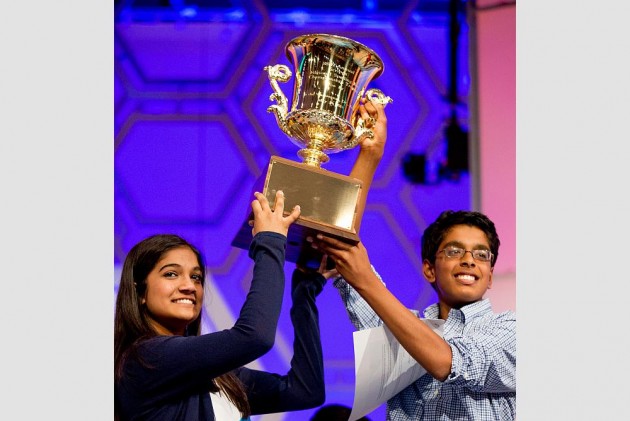 Print
A
A
A
increase text size
Outlook May 29, 2015 09:33 IST Indian-American Children Win Spelling Bee Contest For Second Time in a Row

Scripting history, two Indian- Americans children today won the world's prestigious spelling bee in a tie the second time in a row, maintaining the community's complete dominance on the competition.

Vanya Shivashankar, 13, and Gokul Venkatachalam, 14, were declared co-champions of the Scripps National Spelling Bee as they together lifted the golden trophy amid confetti and applause in a repeat of last year's surprise tie - a feat achieved by Indian-Americans for the second consecutive year.

The two winners will each receive over USD 37,000 in cash and prizes.

With this year's success, young Indian-Americans have won as many as 14 of the past 18 contests and the eighth year in a row.

This is also the first time a sibling of a former champion won. The third spot was also bagged by an Indian- American Cole Shafer-Ray from Oklahoma.

"This is a dream come true. I have wanted this for such a long time," Shivashankar, the sister of 2009 champion Kavya Shivashankar, said while dedicating the award to her grandmother who passed away in October.

Appearing for the fifth and the final time for the contest, the eighth-grader from Kansas confidently spelled words as cytopoiesis, bouquetiere and thamakau before she was asked to tackle the golden word.

Asked later what was on his mind when he heard the word nunatak, his winning word, he said: "Me and Vanya are going to be champions."

Yesterday, racist trolling was casting an ugly pall over social media as the reaction from some of the nearly one million people viewing the finals live posted biased views about the domination of non-Americans on the contest.

"The kids in the spelling bee should only be AMERICAN," a third tweet said.

Earlier, slamming the racist backlash against the winners of Indian-origin, the bee's longtime director Paige Kimble said their domination of the contest could be put down to their "perseverance".

Indian-Americans account for just under 1 per cent of the US population, but make up more than a fifth of the 285 spellers competing this week in the 88th edition of the bee, beginning today. If recent trends hold, they would account for more than a third of the contest's 50 semifinalists.

In 2014, Sriram Hathwar and Ansun Sujoe were declared the joint winners.

A total 285 children were competing against each other, of whom 139 were boys while 146 were girls.

An eighth grader from St Louis Missouri, Venkatachalam said he had worked hard for the contest for the past several years and said he takes to spelling like his idol LeBron James does to basketball.

In addition to playing the sport, Venkatachalam is a fan of rap and alternative music, counting among his favourites Nas, Linkin Park and Macklemore.

When he is not listening to music, he likes to read — his top pick is Life of Pi - or watch his favourite movie, X-Men: Days of Future Past.

At school, Venkatachalam is drawn to mathematics and economics, and dreams of attending Stanford University and studying business so that he can become an entrepreneur or a stockbroker.

For several years now, Indian-Americans have put up formidable challenges to their competitors and won most of the prestigious spelling awards in the United States.

Continue FREE with Ads Pay Rs. 1 to Read Without Ads
READ MORE IN:
International
Next Story : US Soccer Federation to Vote Against Blatter's Re-Election
Download the Outlook ​Magazines App. Six magazines, wherever you go! Play Store and App Store