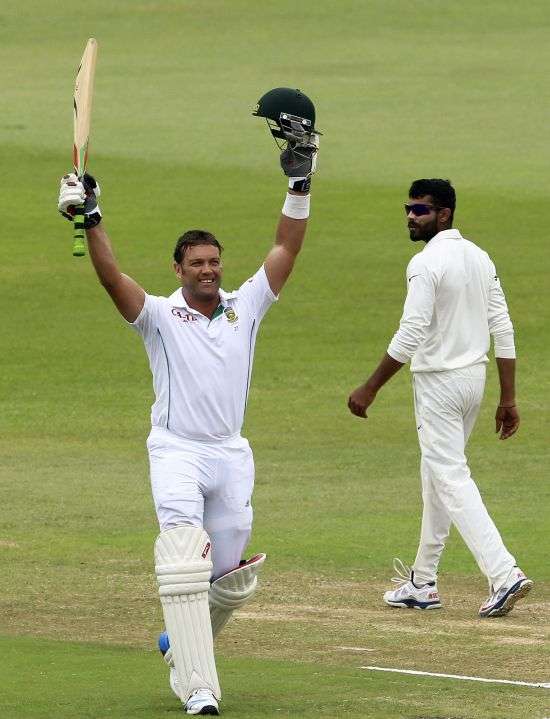 Jacques Kallis made his swansong match a memorable one by hitting his 45th Test hundred as India faced a daunting task of batting out the entire fifth day to save the series-deciding second cricket Test against South Africa, here.

Kallis ensured that he left the Test arena in a blaze of glory with a fluent 115 as the home team posted a mammoth 500 in their first innings to take a sizeable 166-run lead.

India lost both the openers Murali Vijay (6) and Shikhar Dhawan (19) before reaching 68 for two on yet another rain-marred day, still needing 98 runs to avoid the ignominy of an innings defeat.

Pujara and Dhawan had batted with caution after paceman Vernon Philander had Vijay caught in the slips. But Faf du Plessis took a spectacular one-handed catch to send back Dhawan, who played uppishly in the mid-wicket region and failed to clear the fielder.

It was yet another waste of a watchful start by Dhawan, who ended this Test series with scores of 13,15, 29 and 19.

With one day left in the match, the visitors have to bat out the final day to share the honours in the two-match series. The first Test in Johannesburg had ended in a thrilling draw.

South Africa on the other hand need to take eight wickets on a tricky fifth day track at the Kingsmead to give Kallis a perfect gift in his farewell match.

At Kingsmead, play was stopped with nearly 30 minutes remaining in the post-lunch session, as the umpires called for an early tea-break with Faf du Plessis batting on 41.

Robin Peterson was out for 61 just before the rain came.

The start of the post-lunch session was also delayed by 15 minutes due to rain today.

Peterson (61 off 52 balls) hit a quick-fire fifty, studded with nine fours and a six to help build the lead over India, who had score 334 runs in their first innings. He put up 110 runs with du Plessis as their partnership progressed at 6.11 runs per over.

Ravindra Jadeja picked his second five-wicket haul in Test cricket, in his first match overseas, taking 5/138 from 58 overs. Zaheer Khan (2/95) picked up a wicket on either side of lunch. Mohammad Shami (1/104) was taken for runs after the second new ball, as was Ishant Sharma (0/114). Rohit Sharma (0/29) was the only other bowler tried.

Starting at 395/7 after play was again delayed by 15 minutes post lunch, Peterson and du Plessis looked for runs as against the approach seen early in the day. The first over after the break bowled by Zaheer was taken for two boundaries and the batsmen attacked Jadeja as well.

India delayed taking the new ball still, apparently keen to play for time and force a draw. But five overs later, in the 147th, the two umpires decided to change the ball and gave India their second new ball.

Peterson should have been given LBW on a delivery bowled by Mohammed Shami by the umpires thought otherwise. The batsman was on 31 runs at that time and went on to cause mayhem afterwards. The new ball also meant that Jadeja's marathon spell came to an end during which he returned figures of 25-8-53-2.

South Africa reached a comfortable 395 for seven at lunch.

Play started under overcast conditions as the Proteas took a 61-run lead over the visitors' first innings total of 334.

Kallis, playing in his 166th match, scored 115 (off 316 balls, 13 fours) before getting out and in doing so went past Rahul Dravid's tally of 13,288 runs in 164 matches by one run to end up as the third-highest run-getter in Test cricket history.

At the break, Faf du Plessis (5) and Robin Peterson (5) were the unbeaten batsmen.

Ravindra Jadeja picked his second five-wicket haul in Test cricket, in his first match overseas, taking 5/128 from 55 overs. Zaheer Khan (1/75) too picked up a wicket in this session, his first of the innings. Mohammad Shami (1/72) had taken one on day three, while Ishant Sharma (0/88) and Rohit Sharma (0/22) were still searching for success.

Play started 30 minutes before schedule once again, as South Africa began at their overnight score of 299/5.

Rohit bowled the last ball of the 106th over that was pending and South Africa's 300-run mark came up in the very next, the first full over of the day. It was a day of milestones thereafter, particularly for Kallis.

He started the day slowly, sailing into the 90s with two boundaries and a few singles, not looking in any hurry. Indian skipper Mahendra Singh Dhoni further delayed the new ball, making sure the run-scoring did not go up to put his team under any pressure. In the 188th over, Kallis flicked Jadeja to fine leg for four, moving to 98, as also taking his side past the Indian score of 334.

Continue FREE with Ads Pay Rs. 1 to Read Without Ads
READ MORE IN:
Jacques Kallis Sports
Next Story : Cong, AAP Hit Out at Gadkari for Alleging a 'Deal'
Download the Outlook ​Magazines App. Six magazines, wherever you go! Play Store and App Store