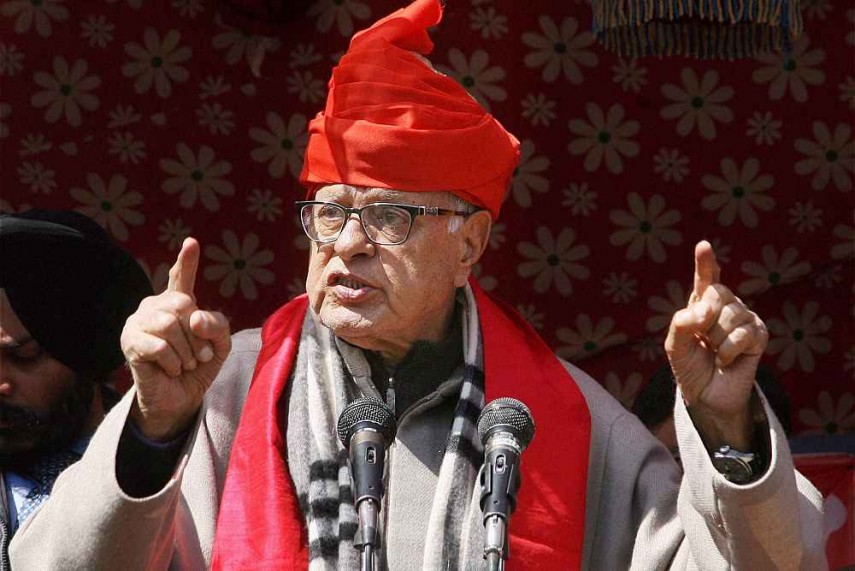 Print
A
A
A
increase text size
Outlook May 12, 2016 18:32 IST India, Pakistan Should Engage in Summit-Level Talks: Farooq

National Conference President Farooq Abdullah today called for summit-level talks between India and Pakistan to make "a new beginning" towards heralding peace and harmony in the sub-continent.

"We favour summit-level talks between India and Pakistan. The leadership of both countries should rise to the occasion and make a new beginning in heralding peace and harmony in the sub-continent," Abdullah said.

He said "bitterness and hostilities of the past" should not be allowed to hover over future of generations as a "dark shadow".

"People of India and Pakistan have the right to lead a dignified, peaceful and prosperous life, which entails peace on the borders and spirit of good neighbourly relations between the two countries," Abdullah said while winding up a four-day tour of border Poonch and Rajouri districts.

Addressing a workers meeting in Poonch town, he said the "traumatic" border shelling over the years, especially last year, had left people living a life of insecurity.

He said perpetual fear and element of uncertainty were detrimental to overall growth of those residing on borders.

"Damage caused to life and property continues to haunt the people, who are yearning for peace and tranquillity," he said, and lauded their courage for braving the brunt of hostilities.

Border-dwellers had benefited from the ceasefire agreement arrived at during the tenure of Atal Bihari Vajpayee as Prime Minister, Abdullah said, and hoped that spirit would be a guiding force in normalising relations between India and Pakistan.

He said the people of Jammu and Kashmir will be main beneficiaries of such a bold initiative.

Responding to concerns of border-dwellers over their land holdings remaining uncultivated due to border fencing, the former chief minister urged the army to work out a mechanism so that farmers are able to cultivate their land for sustenance.

He also stressed on the need for immediate disbursement of compensation to those whose properties were damaged due to border shelling, besides incessant rains and the flash floods of 2014.

Stressing on the need for maintaining brotherhood, especially in the wake of an "orchestrated campaign unleashed by divisive forces" to disturb communal harmony for their "petty political interests", the National Conference President said a befitting reply to them would further strengthen religious and regional unity.

Continue FREE with Ads Pay Rs. 1 to Read Without Ads
READ MORE IN:
Farooq Abdullah National
Next Story : States Should Settle Dispute on SYL By Themselves: Centre to SC
Download the Outlook ​Magazines App. Six magazines, wherever you go! Play Store and App Store