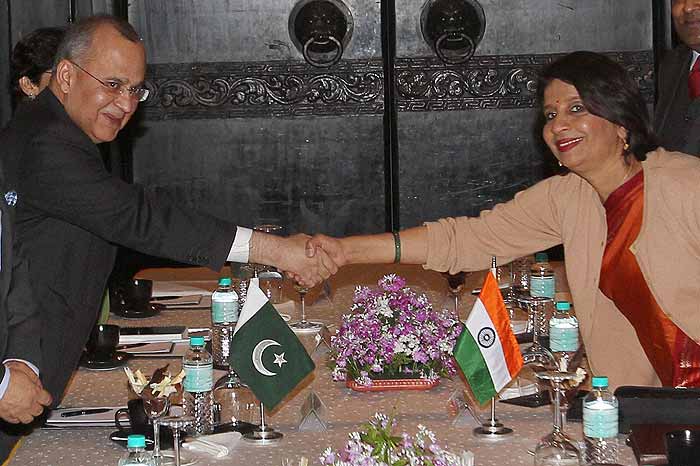 outlookindia.com
-0001-11-30T00:00:00+0553
A day after their meeting here aimed at restoring the dialogue process, Foreign Secretary Nirupama Rao and her Pakistan counterpart Salman Bashir today struck a note of optimism and talked about taking the engagement process forward through a "vision" for the bilateral relationship.

Both Rao and Bashir described their 90-minute meeting as useful and expressed satisfaction over their discussions which covered a broad range of issues.

"We had a good meeting, useful meeting. We were able to discuss a number of issues of relevance with the (Indo-Pak) relationship," Rao told reporters here.

She said her discussions with Bashir were not dominated by any one issue "but we talked about the (dialogue) process and charting the way forward, what the best modalities would be" in this direction.

"All in all it was a useful meeting," Rao said, adding that both the sides had adopted an open and "constructive attitude." "I'm satisfied."

Asked about the next step, she said, "We need to wait and see."

"We have to wait for this process to mature. We should be optimistic, cautiously optimistic because there are many issues that remain to be resolved," she said.

Pointing out that the nature of India-Pakistan relationship had been complex, Rao said, "We have to remain realistic. We should be aware of the realities."

She emphasized the need for a "vision" for the future of the relationship and noted that this was the feeling of Prime Minister Manmohan Singh.

Bashir, she said, had told her that his government also was committed to taking forward the dialogue process on outstanding issues in a constructive way.

The Pakistan Foreign Secretary separately told reporters that "there was a broad meeting of minds" during his meeting with Rao and he had "every reason to be quite satisfied".

"We have had very productive exchange of views. We will be reporting respectively to our governments and then take it from there," he said.

Asked whether 2007 Samjhauta Express blast issue came up during the meeting, Bashir was evasive. Rao said "all" outstanding issues were discussed.

Bashir pointed out that when the Prime Ministers of the two countries met in Thimphu in April last on the sidelines of SAARC Summit, they had agreed on three things.

"One was to have frequent contacts. We have had frequent contacts. The second was that we should make effort to bridge the trust divide. I think, we have, to a considerable extent, been able to do that. And third was that everything should be discussed. That is the format that we are pursuing," he said.

He said there is consensus at the leadership level and between the two foreign ministries that "that is the practical way forward."

Asked whether any new initiatives had been discussed during his talks with Rao, Bashir said the meeting was "about how we proceed ahead in terms of the engagement. If you want to get into specific issues, this was not an opportunity for that."

Queried whether the meeting had set the stage for the visit of Pakistan Foreign Minister Shah Mahmood Qureshi to India, Bashir said, "Of course, this was preparatory to the Foreign Minister's visit."

He refused to spell out the dates for the same, saying it was "premature" to announce these. "But we will be sharing this on our return."

Sources said Qureshi's visit could take place in the middle of this year.

On the feeling in India that Pakistan was dragging its feet on 26/11 probe and trial, Bashir said his government's "strategy is that any such thing like 26/11 or anything else, the perpetrators must be brought to justice. I think we are proceeding accordingly."

He refused to comment when pointed out that Jamaat-ud Dawa chief Hafiz Saeed continued to engage in public ranting against India. "I would not like to comment on any one specific individual at this point in time. I think what is important is that we all cooperate along with the international community to deal with issues which are of concern to you, which are of equal concern to us," he said.

Bashir defended his Foreign Office spokesman Abdul Basit for his comment that India was using terror as a propaganda against Pakistan, saying his remarks were "entirely in line with what has been said previously."

He, however, went on to add that "the point is to get over that point and start to work together."

Bashir said he would not like to say anything "negative at this time" as "the important thing is to have a clear vision of the way we want to proceed, go ahead and make best efforts to work together."

When pointed out that Home Minister P Chidambaram had earlier blamed Islamic terrorism for Samjhauta blasts, Bashir said, "I am not in a position to really comment on what the Home Minister had said."

However, he added that "every incident of terrorism is despicable. We condemn it whether it takes place in India or in Pakistan or elsewhere. This is a common issue, it is a global issue, it is a regional issue."

He said it was "a good thing that we have agreed to cooperate to deal with this issue along with all the other issues. There is a belief that (there is) a large area of convergence. Where there are divergences, we need to work on them."

Asked about his views on so-called "Hindu terrorism" that has surfaced in India, Bashir was cautious.

"It is wrong to sort of connote any terror thing with any denomination. That is my personal belief. Whether it is Hindu or anything. I think that is not fair. Therefore we have got to have clarity when we define these issues. Of course, any act of terrorism is condemnable and we should work together to ensure that this does not happen," Bashir said.

On the Kashmir issue, he said it was a "central issue" and hoped it is resolved "in accordance with aspirations of Kashmiri people. That is Pakistan's position and of course we look forward to discussing this along with other issues."