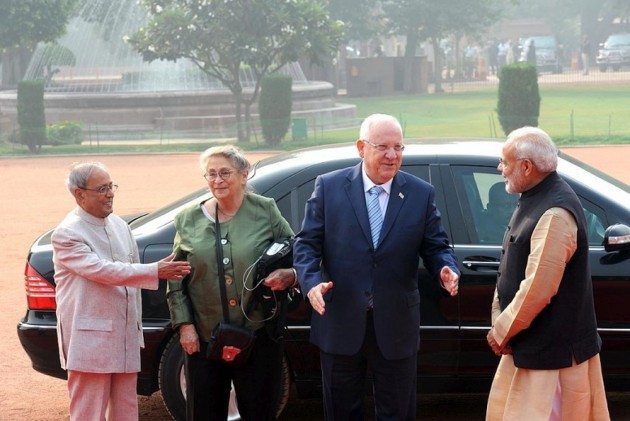 India is looking forward to intensify partnership with Israel for "mutual benefit" and both the countries should work collectively to respond to global challenges, President Pranab Mukherjee has said.

He also said that India needs to develop several sectors including homeland and cyber security in which Israel has "proven capabilities".

Speaking at a banquet hosted in the honour of visiting Israel President Reuven Rivlin at the Rashtrapati Bhavan here yesterday, Mukherjee said challenges of 21st century call for a coordinated response from the global community.

Terming as "historic" the visit of Israel President, as it came after a gap of 20 years, Mukherjee said Rivlin represents the people who Indians admire, with whom Indians feel a strong and unique bond as both are ancient civilizations that have made significant contributions to humanity.

"To effectively respond to global challenges, including climate change, we will need to collectively work for efficient solutions. We must leave our children a world that is better, cleaner and healthier. A world that is at peace, where diverse people live and flourish side-by-side in peace, respectful of each other's beliefs and in total harmony with each other. I am confident that together, India and Israel can realise this important goal," Mukherjee said.

He said as the two nation celebrate 25 years of diplomatic relations next year, India looks forward to further intensifying partnership for mutual benefit and the good of the world.

Lauding Israel's accomplishment, Mukherjee said, "Your leadership, past and present, has inspired your people to overcome unspeakable tribulations and emerge stronger. Through sheer hard work and determination, you have built a highly progressive, confident and self-reliant nation. Your passion for innovation and your entrepreneurial spirit has earned you the title of a 'Start Up Nation'."

He said both the governments have jointly identified areas to be prioritised, in which both have tremendous synergies.

"India needs to develop its capabilities in water resource management, agriculture, defense, renewable energy, academic exchanges, science and technology as well as homeland and cyber security. Israel has advanced technologies and proven capabilities in these key sectors," he said.

Mukherjee said "Both our peoples gained independence after the second World War. Mahatma Gandhi, the Father of our Nation, had believed that the Jews people had a legitimate claim for Israel. Pandit Nehru, too, believed in this. He had said, in 1950 and I quote, 'Israel is a fact'."

"They underline our shared desire to intensify multi- faceted bilateral co-operation. India's economy is presently on a positive trajectory," he said.

Earlier, in his welcome remarks, Mukherjee said it is matter of great satisfaction to India that since up-gradation of relations in 1992, India-Israel bilateral relations have diversified and are marked by high-level visits from both the countries, President's Press Secretary Venu Rajamony said in a statement.

Responding Mukherjee's sentiments, the Israel President said the Middle-East and India have known each other for thousands of years and Israel is ready to share its knowledge with the people of India.