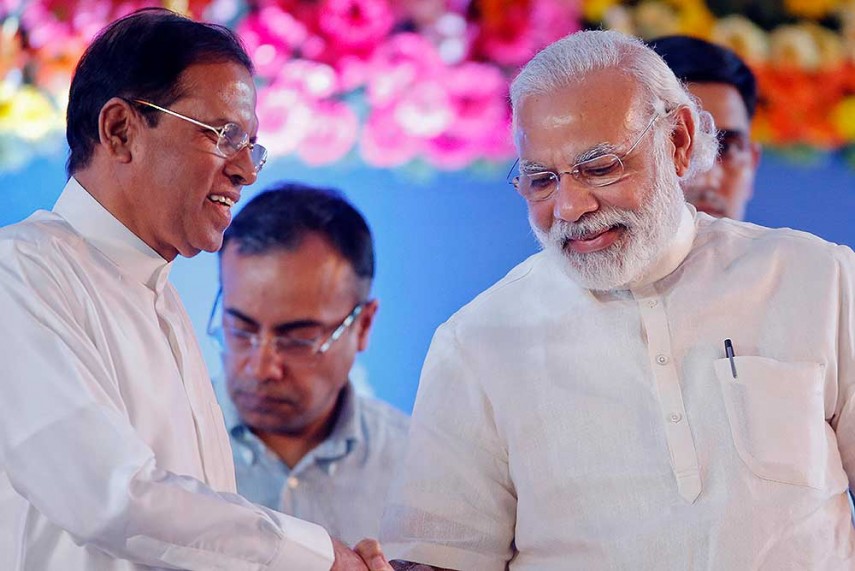 Sri Lanka's ties with India improved in 2016 with high-level exchanges and signing of agreements to give momentum to their relationship, even as issues over a proposed economic and technology pact, poaching by fishermen in each other's water and China's influence in the island nation remained.

Historically, bilateral ties have been fraught with controversies. In the 1980s, the Tamil question dominated relations and more recently differences have sometimes erupted over poaching by fishermen and Sri Lanka’s increasing dependence on China for investment.

But with a change in government in India and Sri Lanka last year, the ties in 2016 showed signs of maturity, breaking away from the past towards an era of synergy and understanding.

One of the defining moments in bilateral ties this year came when Sri Lanka pulled out of the SAARC Summit, which was scheduled in November in Pakistan, after India boycotted the meet over an attack on an Indian army base in Jammu and Kashmir by Pakistan-based terrorists.

In November, Navy chief Admiral Sunil Lanba visited Colombo during which he attended the Galle Dialogue - a meeting of regional navies at the southern coastal city. The visit was aimed at consolidating bilateral maritime security relations amid an increasingly assertive China in the region.

The increasing dependence on China for investment and military aid curtailed Sri Lanka’s ability to limit Beijing's influence in its economic and maritime policy. China has been keen to push its economic and infrastructure proposals to the Indian Ocean states.

India focused on economic consideration to boost ties with Sri Lanka. The Sri Lankan government too appeared interested in building the country through economic ties with India.

During his visit to India in the first week of October, Prime Minister Ranil Wickremesinghe said Sri Lanka expected to sign an Economic and Technology Co-operation Agreement (ETCA) with India by the end of this year.

Wickremesinghe appeared keen to fast-track the ETCA, given the needs arising from Britain’s decision to leave the 28- member European Union economic bloc. The ETCA advocates believe the pact was an imperative to mitigate the effects of Britain's exit from the EU.

The progress on ETCA has been discouraging, however, and some have doubted the benefits of the agreement.

Sri Lanka's Joint Opposition has said the agreement was an "appeasement" of India, ignoring the greater largesses from China.

Opposition legislator, Wimal Weerawansa, said: "With the ETCA, it looks as if the government is keen to help India solve its unemployment problem. They are creating one million jobs for the Indians."

But President Maithripala Sirisena defended his government's decision to enter into the agreement with India, saying protests against it were "politically motivated."

Harsha de Silva, the deputy foreign minister, had said of the opposition the ETCA: "It must be noted that Sri Lanka's exports to India have been rising in the past few years... Signing the ETCA would, therefore, strengthen bilateral trade between the two countries. Rejecting the agreement would undoubtedly affect this market."

Commerce and Industry Minister Nirmala Sitharaman, too, has boldly dismissed any misgivings about ETCA during her visit to Sri Lanka in September.

Another area of concern in Indo-Lanka ties this year remained the complexities associated with the ongoing fishermen issue. The dispute has earlier escalated tension, and brings to the equation the issue of ceding Kachchatheevu to Sri Lanka by India in 1974.

Sri Lankans are averse to permit licensed Indian fishermen to fish within a "designated area" in their waters. "We are not in agreement with this," Fisheries Minister Mahinda Amaraweera has said.

It has been argued that moderates in Sri Lanka and India want a settlement and ensure the livelihood of fishermen are protected, yet the official response of both the governments to the fishermen's dialogue has been lukewarm.

Soon before the navy chief's visit to Sri Lanka, former president Mahinda Rajapaksa visited Beijing to meet top Chinese leadership. Before he began his visit, he accused India of adopting a "softer line" towards his successor President Maithripala Sirisena.

Rajapaksa mentioned to reporters in Colombo the "tension" his administration encountered with India.

"They (India) were furious when (Chinese) submarines docked at Colombo. From what I know, the Chinese inform the Indian embassy in Beijing before a submarines enters the Indian Ocean. But they made a huge cry about it."

China was Rajapaksa's main international ally when it supported him at international fora and funded his mega development projects, mainly in his home district of Hambantota. Rajapaksa, during his two terms in office, was widely perceived as being close to Beijing.

And his visit to China assumed significance in the wake of a recent public spat between Beijing and Colombo. Chinese Ambassador to Colombo Yi Xianliang had called a rare press conference and criticised Sri Lankan Finance Minister Ravi Karunanayake for his statement that Chinese had lent money to Rajapaksa government at high rates of interest.

The challenge for Sri Lanka, as earlier, is to establish a state of relative equilibrium in its relations with India and China.