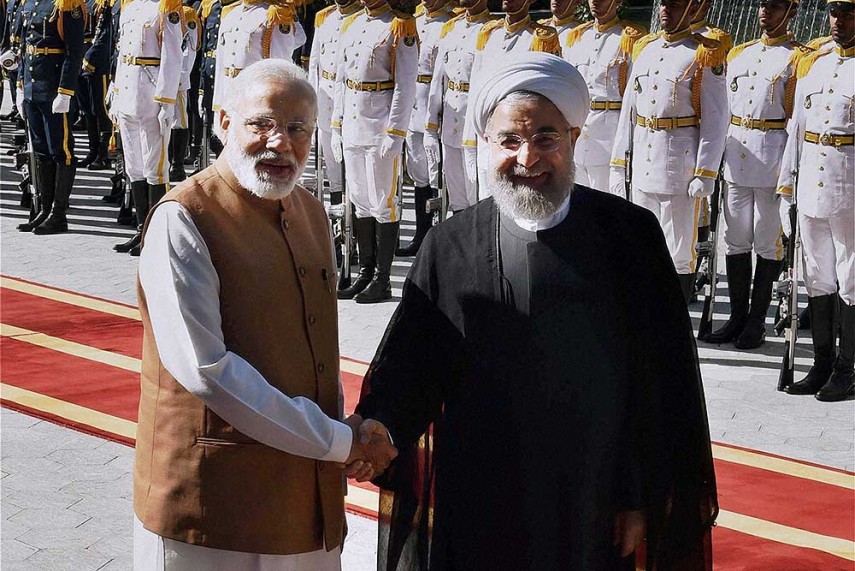 A "milestone" pact on the strategic Chabahar port in southern Iran which will give India access to Afghanistan and Europe bypassing Pakistan was among the agreements signed here today by India and Iran which also agreed to cooperate on combating radicalism and terror.

Besides the bilateral pact to develop the Chabahar port for which India will invest USD 500 million, a trilateral Agreement on Transport and Transit Corridor was also signed by India, Afghanistan and Iran, which Prime Minister Narendra Modi said could "alter the course of the history of the region".

The bilateral agreements signed by India and Iran after detailed discussions between Modi and President Hassan Rouhani included one on setting up of an aluminium plant and another on laying a railway line to give India access to Afghanistan and Central Asia.

Modi's visit, the first by an Indian Prime Minister in 15 years, comes months after the lifting of international sanctions on Iran following Tehran's historic nuclear deal with the Western powers over its contentious atomic programme. Earlier, the then Prime Minister Atal Bihari Vajpayee had visited the country in April 2001.

The key agreement signed was a contract for development of Phase I of the Chabahar port on the southern coast of Iran by an Indian joint venture.

Chabahar port, located in the Sistan-Balochistan Province on the energy-rich Persian Gulf nation's southern coast, lies outside the Persian Gulf and is easily accessed from India's western coast, bypassing Pakistan.

"The bilateral agreement to develop the Chabahar port and related infrastructure and availability of about USD 500 million from India for this purpose, is an important milestone," Modi, the first Indian Prime Minister to visit Iran in 15 years, said while addressing the media jointly with Rouhani.

"This major effort would boost economic growth in the region. We are committed to take steps for early implementation of the agreements signed today," he said.

The trilateral agreement on Transport and Transit Corridor, linked to the Chabahar port development, was signed later by India, Iran and Afghanistan in the presence of Modi, Rouhani and Afghan President Ashraf Ghani.

Describing it as "opening of a new chapter", Modi said, "today, we all are witnessing creation of history, not just for the people of our three countries but the entire region. It will build bonds of connectivity."

Underlining that the agreement was part of the endeavour to "carve out new routes for peace and prosperity" in the region, the Prime Minister expressed confidence that the corridor will "spur unhindered" economic growth and help stop radicalisation of the youth by providing job opportunities.

"The arc of economic benefit will go beyond the three countries... Its reach can extend to Central Asian Countries. It can link South Asia on one end and Europe on the other," he said.

He asserted that the agreement "will strengthen our ability to stand in mutual support against those whose only motto is to maim and kill the innocents. Its success will be a positive vote for peace and stability in the region."

Rouhani, while describing the Chabahar agreement as a "spring" in the ties among the three countries, said it was "not against any country", an apparent reference to Pakistan.

Modi, while quoting Persian poet Hafez, spoke a few lines in Persian to say, "Days of separation are over; night of wait is coming to an end;Our friendship will stay forever."

Earlier, Modi and Rouhani, during bilateral talks, discussed a wide range of issues of mutual concern.

"We have agreed to consult closely and regularly on combating threats of terrorism, radicalism, drug trafficking and cyber crime. We have also agreed to enhance interaction between our defence and security institutions on regional and maritime security," the Prime Minister said.

Terming terrorism as a "big problem running rife and rampant in the region", Rouhani said that both the nations have discussed the issue and agreed to share intelligence to combat the menace.

"Due to the importance of stability and security in the region and especially in the countries like Afghanistan, Iraq, Syria and Yemen and because a big problem called terrorism is running rife and rampant in the region.

India's right to use Chabahar port to access landlocked Afghanistan and eastern Europe without having to go through Pakistan is considered a strategically important move as it will counter China's growing involvement in the region.

Chabahar port lies just 100 km from the Gwadar port in Pakistan, which is part of China's USD 46 billion plan to develop China-Pakistan Economic Corridor and is aimed at opening new trade and transport routes across Asia.

Besides the trilateral pact with Iran and Afghanistan for developing transport and transit corridor using a combination of rail and road connectivity from Chabahar right up to Commonwealth of Independent States (CIS) countries also adds muscle to India's economic clout in Asia.

"The arc of economic benefit from this agreement would extend beyond our three nations. Its reach could extend to the depths of the Central Asian countries. When linked with the International North South Transport Corridor, it would touch South Asia at one end and Europe at another," Modi said.

Compared to the traditional sea routes, it could bring down the cost and time of the cargo trade to Europe by about 50 per cent, he said, adding that "over time, we could even look to connect it with strong sea and land based routes that India has developed with Indian Ocean Region and South East Asia."

India may also finance another road network inside Afghanistan to enable Iran to access as far as Tajikistan through a shorter route.

Road and rail links are to be built so that landlocked Afghanistan can get access to the Iranian port as an alternate to the Pakistani port of Karachi.

Road Transport, Highways and Shipping Minister Nitin Gadkari said India will build a 500 km railway between Chabahar and Zahedan which will connect Chabahar to Central Asia.