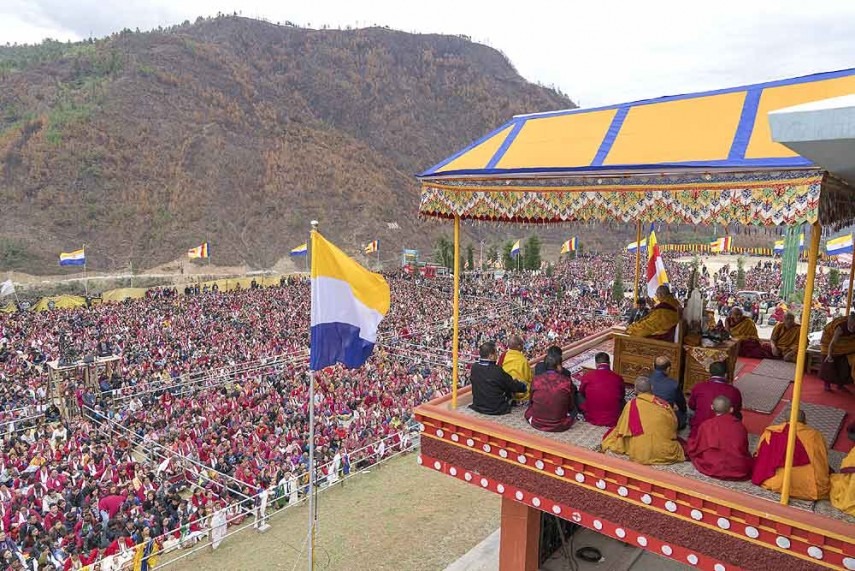 An article titled 'Tawang's history affirms China's sovereignty' in the Global Times alleged that "India has pursued expansionism" since gaining independence in 1947.

"Influenced by the British, India sent troops to the north, beyond the traditional customary border between China and India," said the article written by Jia Liang of the Centre for Tibetan Studies of Sichuan University.

The new piece is part of a number of critical articles Chinese state media organisations have published since the Dalai Lama began his visit to Arunachal Pradesh on April 4.

China considers parts of Arunachal Pradesh as "Southern Tibet" and is opposed to visits by the 81-year-old Nobel laureate or foreign diplomats to the region. It has lodged a diplomatic protest with India over the Dalai Lama's visit, though it was not the first time he visited the state.

Tawang, in northern Arunachal Pradesh, is believed to be the birthplace of the sixth Dalai Lama in 1683 and is at the centre of the Tibetan Buddhism, which makes China wary of the influence of the 14th Dalai Lama, whom it considers a "dangerous separatist".

The article said prior to his exile in India in 1959, the Dalai Lama refused to recognise India's sovereignty over Tawang but changed his stand later.

"In February 1951, the Indian army occupied Tawang and expelled all the administrative staff dispatched by the local Tibetan government. In 1954, the Indian government set up the North East Frontier Agency there and modified the official map. And by 1960, the Indian army completely seized the Tibetan region south of the 'McMahon Line'," it said.

"The Chinese People's Liberation Army once retook the town in the 1962 border war, but the Indian army reoccupied the area the next year," it said, without elaborating why the Chinese military withdrew from the region after announcing a unilateral ceasefire.

"In 1972, the North East Frontier Agency became the Union Territory of Arunachal Pradesh," which was officially upgraded to a state in February 1987 after a legislation was passed by the Parliament of India at the end of 1986.

China has reiterated many times that it does not recognise the 'McMahon Line' and Arunachal Pradesh, it said.

Referring the Chinese military taking over Tibet in 1951, the article said, the Dalai Lama in a telegram to Chinese central government pledged to assist the PLA in "safeguarding the sovereignty and territorial integrity of the motherland".

But, the article claimed, after the 1962 war, the Dalai Lama "slandered that China invaded India and he gave 17.5 kilogrammes of gold to India as a financial endorsement for fighting against China."

"The Dalai Lama and his supporters, who have been in exile in India for a long time, have obsequiously depended on New Delhi for their survival," it said.

"Nevertheless, handing an area of some 90,000 square kms, including Tawang where the Sixth Dalai Lama was born, over to another country is outrageous. It is also noteworthy that the Tawang Monastery was built by the fifth Dalai Lama," it said.

Referring to Dalai Lama's comments in 2010, that "it is indisputable that I am a son of India... I am a Tibetan in appearance because my parents are Tibetans, but spiritually I am Indian," the article said. "As of last month, he has labelled himself as 'a son of India' at least 21 times".

"Therefore, as 'a son of India' why is he qualified to talk about 'representing the people of Tibet' and the religion, language, culture and human rights in Tibet?," it said.

"It is suggested that the Dalai Lama (should) not go further on selling out national sovereignty and territory. He should stop campaigning for the illegal and ineffective 'McMahon Line' as it is a tremendous betrayal and harm the Chinese people, including more than six million Tibetans," it said.

"What's more, the Dalai Lama should not overestimate his influence on China-India relations. It has been proven in both history and status quo that no matter how the Dalai Lama acts as a pawn or a troublemaker, the fact that the 'McMahon Line' and 'Arunachal Pradesh' are illegitimate and ineffective cannot be disputed," it said.

"The Dalai Lama should refrain from promoting any illusion about 'Tibetan independence'." And, it said, if the Dalai Lama continued to support calls for Tibet independece he will "meet his Waterloo".