India Does Not Have Power to 'Retrieve' PoK: Farooq Abdullah 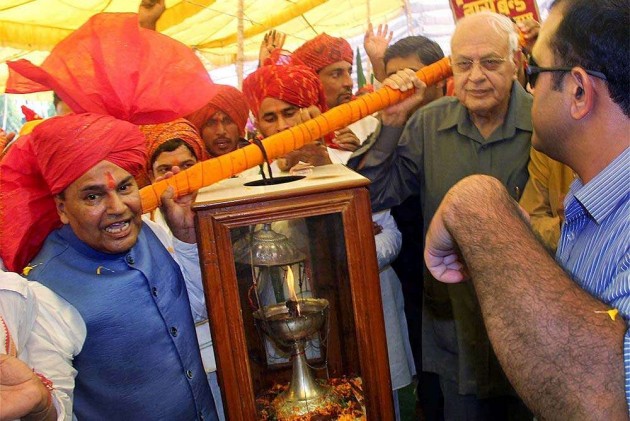 Print
A
A
A
increase text size
Outlook December 03, 2015 12:06 IST India Does Not Have Power to 'Retrieve' PoK: Farooq Abdullah

Former Chief Minister Farooq Abdullah today defended his assertion that "PoK is part of Pakistan and will remain with it", saying neither New Delhi has the power to retrieve that side of the divided line, nor would Islamabad be able to take this part of Kashmir.

"After doing politics all these years, I do not see that we have the power to retrieve that (PoK) or they (Pakistan) can retrieve this (J-K)," Abdullah, who is also the president of opposition National Conference (NC), told reporters here.

Abdullah said the only "trouble" with that solution is that the "shops of those who want the situation in Jammu and Kashmir to remain as such will close down."

"They are surviving because of the division and their shops will close once there is a solution," he said, referring to those who criticised his remarks.

Reacting to the criticism of the BJP, the former Union Minister said it was a suggestion put forth by former Prime Minister Atal Bihari Vajpayee, who belonged to the BJP.

"Vajpayee went to Pakistan via bus and he spoke to (Pakistan Prime Minister) Nawaz Sharif. He suggested him to keep that (PoK) and we will keep this (J-K).

"He was BJP PM, was he not? When he gave this suggestion then, why are they (BJP) enraged now? If they have any other solution and they think they can occupy that (PoK) by military might, why are they not doing that then?" Abdullah asked.

Abdullah said his party would support any other solution  which could help in creating good relations between India and Pakistan.

"I believe if there is any other solution which can create good relations among Jammu, Kashmir, Ladakh and India and Pakistan, NC has no problem in accepting that. I have said this earlier several years ago and I will continue saying this," he said.

The NC president said dialogue is the only option to address all issues.

"Dialogue is the only solution. There is no other solution. We have had so many wars, did that solve our problems? Is there any other way by which you think there will be a solution. I do not see it," he said.

He said Prime Ministers of India and Pakistan have realised that there is no alternative to dialogue.

"Now after my remarks, what happened by the God's grace. India and Pakistan premiers met in Paris with love. It is because there is no other solution (than dialogue)," he said.

He said it is the people of Kashmir on both sides who are dying because of the situation. "One explosion here and tourism disappears. What industries we have here. Shopkeepers, houseboats, hotels are sitting idle, there is no business.

"They have the fear of terrorism. When will this end? When will we sleep at ease?" he said.

Abdullah said he was a free citizen and would not apologise to anyone over his remarks.

"I am not going to apologize to anybody, I am a free citizen of this country and as a free citizen I put my view. What will Farooq Abdullah say if anyone is enraged?" he said.

He said the PDP-BJP coalition was "lying" to the people of the state about the financial package announced by Prime Minister Narendra Modi for the development of the state.