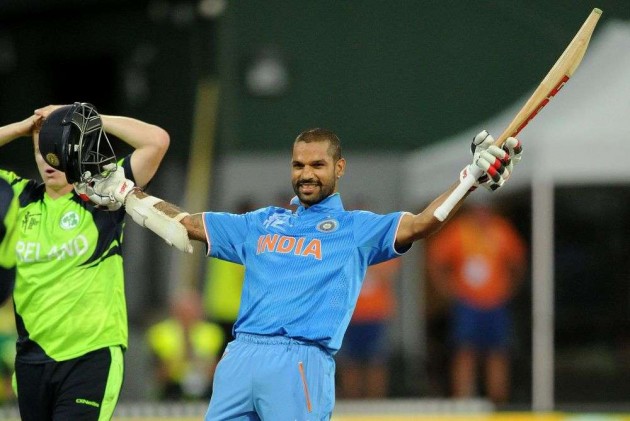 Chasing a respectable Ireland total of 259, opener Shikhar Dhawan (100 off 85 balls) sent the Irish bowlers on a leatherhunt en route his eighth ODI hundred as the defending champions reached the target in 36.5 overs to record their fifth consecutive win in this tournament.

With Rohit Sharma (64, 66 balls) for company, Dhawan added a record 174 runs for the opening wicket to set the platform as India took the top position in group B with 10 points from five games.

While Dhawan had 11 fours and five sixes in his innings, Rohit's second half century in the tournament had three fours and three effortless sixes.

It turned out to be an extended batting practice session for the 'Men In Blue' as they toppled the previous eight-match winning streak record of Sourav Ganguly-led team in 2003. India's nine-match record started from their group league game against West Indies at Chennai back in 2011.

While 260 was not a tall order for India's formidable batting line-up, the flat deck at the Seddon Park made the life for inexperienced Irish pacers even more difficult.

The in-fom Dhawan started the onslaught with some power packed boundaries as he recorded his second century in the mega event. It had the muscular pull-shots, the precision shots like cuts and cover drive bisecting fielders in the off-side cordon and the lofted six.

But one shot that would stand out would be the six off left-arm spinner George Dockrell. It was a tossed up delivery and he had failed to reach to the pitch of the delivery but still went through with the shot as the bottom hand came off the handle. The ball went sailing over long on fence for a six.

When the seamers bowled, the short ball went in the region between mid-wicket and deep mid-wicket while the fuller deliveries were hit straight with utter disdain. 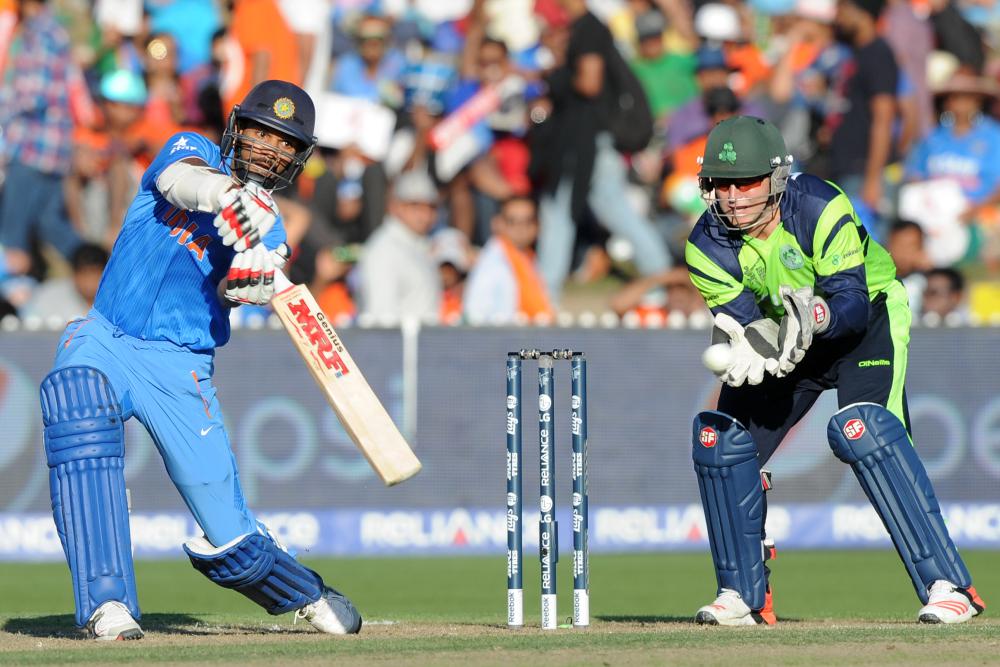 Rohit didn’t play a barrage of strokes like Dhawan but still completed his half-century off 49 balls. Out of his three sixes, the first one off John Mooney which was just caressed over long-off stood out.

In the end, Virat Kohli (44 not out) and Ajinkya Rahane (33 not out) completed the formalities with a 70-run stand for the third wicket.

India will play Zimabwe at Auckland in their final group league encounter at Auckland’s Eden Park on Mach 14.

Earlier, Indian bowlers reigned supreme after an indifferent start as they dismissed a spirited Ireland for 259 in 49 overs after the opposition opted for batting.

Ireland were cruising at one stage with scorecard reading 206 for three but Indian bowlers made a fantastic comeback at the back-end of the innings, claiming as many as six wickets for 32 runs in a phase of 6.3 overs. 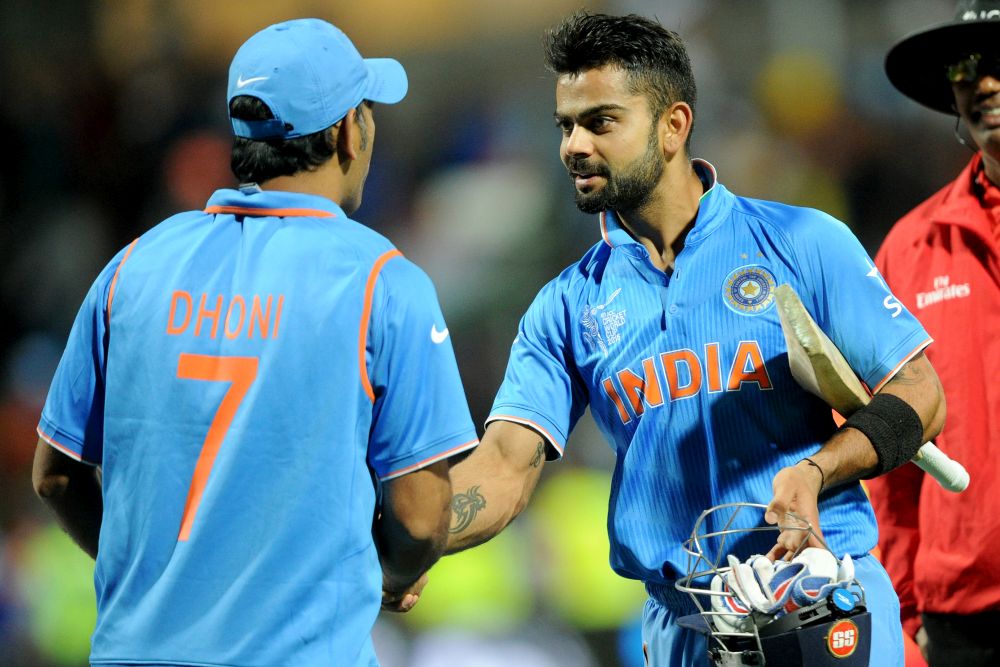 In an astonishing record, India now have bowled out opposition for the fifth time in a row.

Niall O’Brien with a run-a-ball 75 that had seven boundaries and three sixes was the top-scorer while skipper Porterfield's patient 67 off 93 balls gave the Irish a platform.

However despite losing wickets in a heap, Ireland’s score is the highest among the five teams that have played against India. The middle and lower-order collapse hurt Ireland as Ravichandran Ashwin (2/38) was the most impressive Indian bowler on view although Mohammed Shami (3/41 got more wickets.

For the first time in the tournament, India’s new ball attack didn't strike in the opening spell as Porterfield and Paul Stirling batted with a lot of positive intent. Both Yadav and Shami bore the brunt of their wide blades.

With hardly any movement in the air and nothing much off the pitch on a track that was not as pacy as it has been in Seddon Park over the years, Porterfield and Stirling backed themselves to play some audacious shots.

It started in the third over when Porterfield rocked back to a short delivery from Yadav and hit it over mid-wicket for a six. The India fast bowler then followed up with a fuller delivery which was then driven past the mid-off fielder.

Stirling also showed his intent as he lofted Shami over mid-wicket for his six. The 50 came in the 8th over and Ireland took advantage of the early field restrictions better than many of India’s earlier opponents.

The left-right combination doing well also meant that bowlers had to alter the line repeatedly which created problems. The pair added 89 runs at a quick clip before India’s best bowler on the day Ashwin beat Stirling in flight as he lofted one without reaching to the pitch of the delivery and Rahane at long-off took a simple catch.

With Ed Joyce (2) coming in, Dhoni had two left-handers to deal with and his response was to put Rohit Sharma and Suresh Raina in operation from both ends. Raina in fact got Joyce early which brought in the elder of O’Brien brothers Niall. 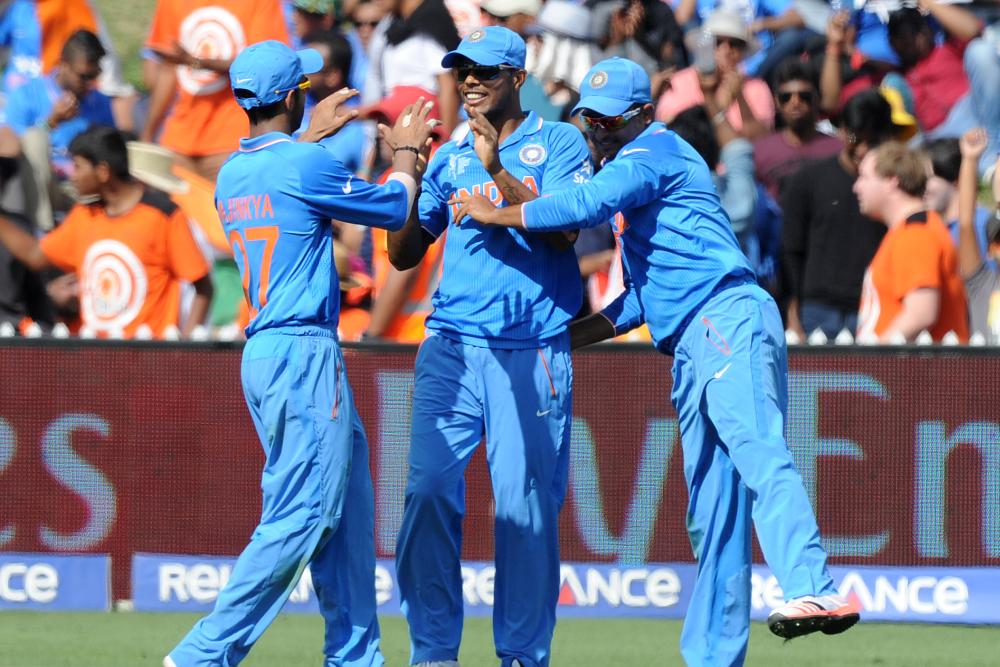 O’Brien-Porterfield duo then added 53 runs for the third wicket. The Irish captain, who has had a quiet tournament so far, got his 50 off 65 balls as O’Brien also played himself in not taking too many chances initially.

Porterfield was out trying to whip a Mohit delivery over deep mid-wicket but only got a leading edge for Umesh to run backwards from his mid-off position to take a nice catch.

It was after Porterfield’s dismissal that O’Brien took off. His first 20 runs came off 39 balls with two boundaries but he blasted his next 55 runs off 36 balls with five more boundaries and three big sixes to his credit.

In fact, he reached his 14th ODI half-century with a six over long-on off Ashwin. To celebrate the feat, he dispatched Jadeja over mid-wicket in the very next over while Yadav also got the same treatment with as many as 61 runs were added for the fifth wicket with Andy Balbirnie (24) in just 7.4 overs.

But once Balbirnie was dismissed by Ashwin trying to go for a sweep shot, the innings fell apart and the chances of reaching close to 300 was gone.