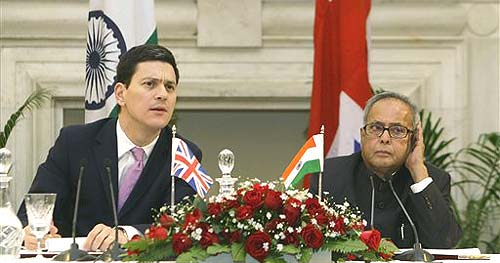 outlookindia.com
-0001-11-30T00:00:00+0553
India on Wednesday said that it had made it clear to Britain through diplomatic channels that it did not share its Foreign Secretary David Miliband's views linking resolution of the Kashmir issue with terrorism.

"In our normal diplomatic channel, what is proper and just we have done it and now it is a closed chapter," he told reporters when asked whether Prime Minister Manmohan Singh had written a letter to his British counterpart Gordon Brown over Miliband's observations.

Sources in the Prime Minister's Office denied that Singh had written any letter to Brown.

"No letter has been written," the sources said when asked about reports that Singh in a letter to Brown had expressed disappointment over Miliband's behaviour and comments.

Mukherjee said when the Foreign Secretary of UK visited India he had shared his perception about the situation with him and the Indian delegation.

"I told him and all the interlocutors that this is your perception and we do not share it," he said, adding that there was no question of giving anyone a cold shoulder.

In an article in a British newspaper, Miliband had written that resolution of the Kashmir issue would deny extremists in the region one of the main reasons for taking up arms, prompting the External Affairs Ministry to point out that it did not need any "unsolicited advice" on Kashmir.