India Breaks the Jinx, Beats SA For the First Time in World Cup 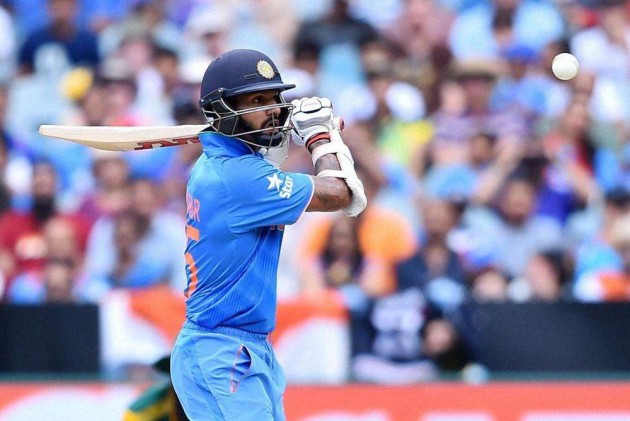 Print
A
A
A
increase text size
Outlook February 22, 2015 13:15 IST India Breaks the Jinx, Beats SA For the First Time in World Cup

India defeated South Africa by 130 runs in their second pool B match at Melbourne, Australia. SA scored 177 in 40.2 overs while chasing India's 307.

SA were bowled out for 177 with 9.4 overs unused as Faf du Plessis's departure for 55 sparked a collapse of seven wickets for 44 runs.

The defeat was South Africa's heaviest in World Cup history.

India won the toss and chose to bat but had a shaky start as Rohit Sharma was run out before he could start scoring.

Shikhar Dhawan hit a century off 146 balls, with 18 boundaries, as India posted a score of 307 in their Pool B match against South Africa at Melbourne.

Dhawan and Virat Kohli steadied the Indian innnings with a 127-run partnership, before Kohli fell for 46. This was the second successive century partnership between the Delhi duo, following up on the 129 they had put against Pakistan.

India had posted 261 when Dhawan fell after scoring 137 runs.

Ajinkya Rahane chipped in with his speedy 79 runs off 60 balls.

Towards the end, a cluster of wickets fell in quick succession.

Looking forward to the South African innings, Rahane said: "It's a decent total to defend, with the big outfield, if we bowl well. First ten overs will be crucial." 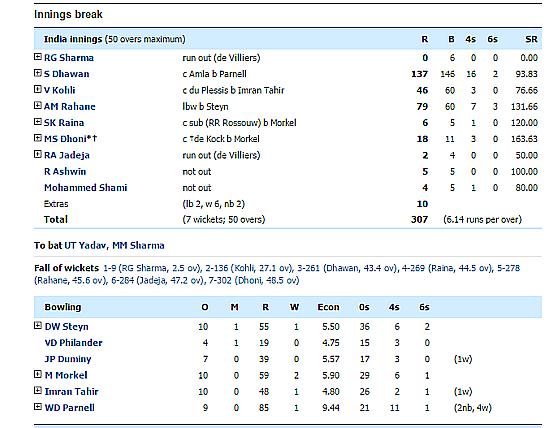 In the second inning, where SA had pinned all their hopes on the batsmen, Indian bowlers turned out to e successful in creating a pressure on the S African team from the very beginning. Once again India made sure they didn't make mistakes. South Africa's arrived shortly.

The Indian bowlers hardly threw a bad ball bowled in the first three overs, and Quinton de Kock went manufacturing something in the fourth, driving Mohammed Shami straight to mid-off with the ball nowhere near driving length.

Amla was handcuffed by the lack of easy boundaries before he top-edged a hook. The much-maligned bowling was doing the job for India once the batsmen had put runs on the board.

At 40 for 2, Faf du Plessis and de Villiers came together. They added 68 for the third wicket, but they had to earn every run. India hustled in the field and bustled with the ball. There was no freebie on offer. With the asking rate rising, every set of two-three dot balls imparted pressure.

De Villiers' response to four straight dots in the 23rd over was to risk an improbable second, but India's fielding today gave away nothing. Mohit Sharma swooped in from deep cover, and threw right by the stumps. The asking rate was now close to 7.5, and South Africa now needed a miracle.