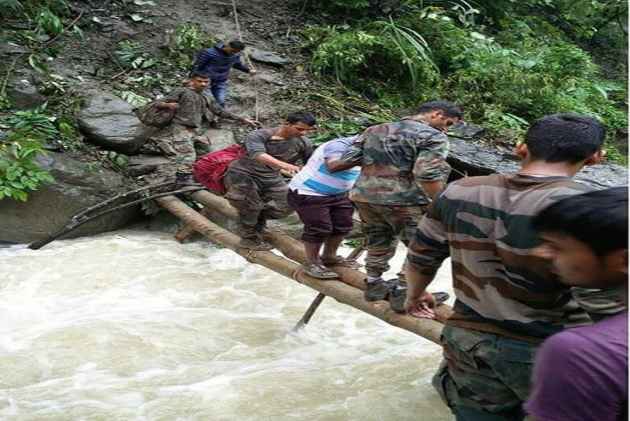 Incessant rains for the past three days have triggered landslides and flash floods in various parts of Arunachal Pradesh, and claimed at least one life, officials said.

Major rivers in the state are flowing above the danger level while surface communication was disrupted at many places along the NH-415 that links Assam with Arunachal Pradesh, officials said.

A three-year-old child was washed away near police colony here last evening and her body was later fished out, police said.

Councillor Gora Lotak of Itanagar Municipal Council said the a power house near Raj Bhawan has suffered massive damage while councillor Donik Tayu said the private residence of Deputy Chief Minister Chowna Mein has also been affected due to landslide.

Landslides also occurred near Dree ground, 6 Kilo and other spots on Naharlagun-Itanagar road and workers of disaster management authority, PWD, police, NDRF and SDRF were repairing the damage, officials said.

Sonam said that rivers like Barapani, Senki View and Chandranagar were flowing above the danger level.

Due to rising level of Senki, people residing in the upper colony of Chandranagar were evacuated to a relief camp.

In Naharlagun of Papum Pare district, people living near Barapani river were asked to shift to safer places immediately, officials said adding that various roads were damaged at Karsingsa.

A report from West Siang district said that heavy rainfall over has caused water logging in various roads.

Officials said 15 granaries and several houses have been inundated by waters of Yomgo river while a poultry farm was badly affected.

In Tawang district, surface communication was disrupted after a large portion of a link road between Bomja and Kharung was washed away, officials said.

The Met department predicted more rainfall for the next few days.