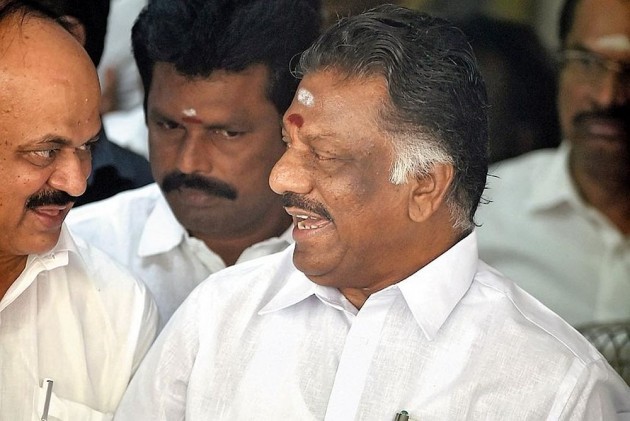 Former Tamil Nadu Chief Minister O Panneerselvam camp today informed the Supreme Court that they were in advanced talks with the rival AIADMK faction on the issue of merger.

A bench headed by Justices Dipak Misra posted the plea filed by AIADMK MLA K Pandiarajan, who is considered close to former chief minister Panneerselvam, for further hearing in July.

"We are in advanced talk with the rival faction on the issue of merger," counsel appearing for Pandiarajan told the bench which also comprised Justices A M Khanwilkar and M M Shantanagoudar.

The AIADMK MLA has challenged the decision of the Tamil Nadu Assembly Speaker rejecting their demand for a secret ballot during the February 18 trust vote won by Chief Minister E K Palaniswami.

He has sought a direction for quashing Speaker P Dhanapal's decision rejecting their demand for a secret ballot to determine the outcome of the floor test.

Besides, the petitioner has sought setting aside of all consequential actions including the February 18 resolution of the Assembly "expressing confidence in favour of council of ministers headed by Edappadi K Palaniswami, as the same are illegal, capricious, discriminatory and violative of the principle of 'secrecy' which is the essence of democracy, free and fair elections..."

He has also sought a direction to the Speaker to conduct a floor test afresh only through a secret ballot in the presence of "independent and impartial" observers nominated by the Supreme Court.

On February 18, jailed AIADMK general secretary V K Sasikala loyalist E K Palaniswami had won an easy trust vote 122-11, helped by the eviction of main opposition DMK and a walkout by its allies, amid stormy scenes during which mikes were uprooted, chairs toppled and sheets of papers torn and hurled around.

Pandiarajan has alleged that the proceedings during the February 18 vote were conducted in a "highly arbitrary and partisan manner, in utter violation of democratic norms and principles of natural justice".

"The request for secret ballot to decide the confidence motion on February 18 was rejected by the Speaker without any justifiable basis especially when there were specific averments and complaints that the MLAs belonging to the AIADMK (including some MLAs out of the group of 11 MLAs headed by the O Panneerselvam) were placed under virtual house arrest," the plea said.

It alleged the MLAs were under "extreme duress" and their affirmative vote during the proceedings on the February 18 was obtained "under the threat of force, fraud and coercion."

Pandiarajan has claimed that 122 MLAs belonging to AIADMK were "forcibly held hostage" at the Golden Bay Resort from February 8 till right before the voting on February 18.

He had alleged that the "undue haste" with which the proceedings took place and "complete lack of transparency and propriety" shown by the Speaker in continuing with the voting process was "arbitrary, malafide, and ought to be quashed".

He has claimed that Panneerselvam had given a representation on February 19 to the Governor of Tamil Nadu requesting him not to approve the February 18 resolution of the Assembly and urged him to fix another date for a fresh vote of confidence by secret ballot.

Pandiarajan said since the Governor has "not taken any steps" on the representation till date, he is "constrained to file the instant petition" in the apex court.