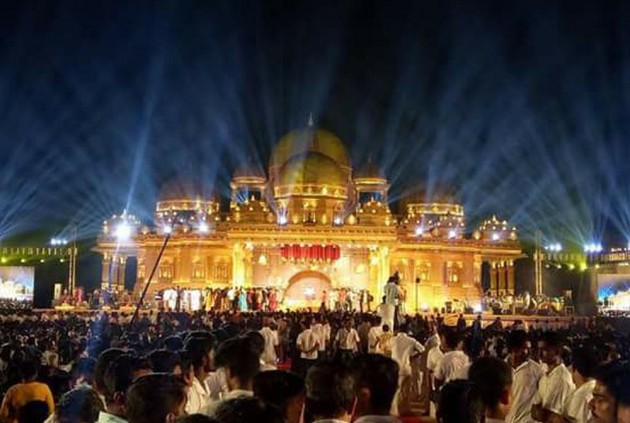 After Ex-Karnataka minister and BJP leader Janardharn Reddy hosted a big fat wedding event for his daughter, now a former Congress minister in Kerala has courted controversy for his son’s lavish wedding ceremony in Thiruvananthapuram.

Adoor Prakash, who was the revenue minister in the previous Oommen Chandy-led UDF government, had a venue, modeled on the historic Mysore Palace, set in a 7-acre Rajdhani Gardens  for the wedding of his son. Prakash’s son, Ajay Krishnan tied knot with Megha, daughter of the controversial hotelier, Biju Ramesh, who had raised the bar scam allegations against the previous Congress-led UDF government. Mr Ramesh's bribery charges had led to the resignation of two ministers in the Oommen Chandy government.

Malayala Manorama reported that Rajya Sabha Deputy Chairman PJ Kurien and former union minister Vayalar Ravi attended the wedding among others. However, most of the leaders from Prakash’s own party, including Oommen Chandy and Opposition leader Ramesh Chennithala, stayed away from the ceremony.

The venue had a seating capacity of 20,000 people, with facilities to serve food for 6000 people a time. The mandap was built upon the model of the famous Akshardham Temple. Reports suggested that around 300 employees had worked for nearly one-and-a-half month to make the arrangements.  The event followed dance, music and other cultural programmes.

According to an NDTV report, Congress spokesperson Tom Vadakkan said in Kochi that his party believed in 'austerity' and does not favour lavish weddings. "Austerity is the benchmark of Indian National Congress. If there is any issue regarding the wedding,the state Congress can bring it before the high command," he said.

According to Malayala Manorama, Biju Ramesh has maintained that the whole ceremony was held in accordance with the law, adding that the authorities can check any malpractices.