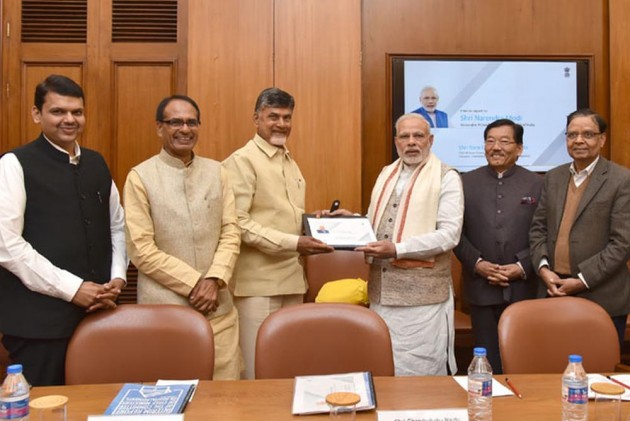 A Rs 1,000 subsidy for purchase of smartphones by non-tax assesses and small merchants and a cash transaction tax on withdrawals of Rs 50,000 and above in banks have been recommended by a Chief Ministers' panel today to encourage digital payments.

The Chief Ministers' Panel report, which was submitted to Prime Minister Narendra Modi by committee representative Chief Minister of Andhra Pradesh N Chandrababu Naidu, has also made a case of lower/zero merchant discount rate (MDR) for all digital payments to government entities and cap on cash in all type of big ticket transactions.

The 'Merchant Discount Rate' is charged to a merchant by a bank for providing debit and credit card services.

The other recommendations include tax incentives for micro ATMs, biometric sensors etc. And tax refund for consumers using digital payment up to a certain proportion of annual income.

When asked how sure he was about incorporation of these recommendations in the forthcoming budget on February 1, Naidu said, "I am very confident about that."

Explaining about advantage of digital payments, he said that there are lots of cost of handling physical currency because of its printing, movement and security while there is no such cost for digital currency.

Naidu also elaborated that with the increase of volume of digital transitions, the cost will reduce and there is huge opportunity in India because non-cash payment transitions by non-banks per capita per annum is 11 in the country as compared to 26 in China, 728 in Singapore, 355 in the UK, 142 in Brazil, 70 in South Africa and 32 in Mexico.

The panel made a case for relief in prospective taxes for encouraging merchants to accept digital payments and no retrospective taxation to Merchants doing digital transactions.

It also suggested that for Aadhaar Pay, Biometric (FP & Iris) sensors should be provided at 50 per cent subsidy to all merchant points.

The panel said in its interim report that all payment banks and banking correspondents should be made interoperable through AEPS and also provide infrastructure for 1,54,000 post offices by way of interoperable Aadhaar enabled Micro-ATMs.

Naidu also suggested insurance for all digital transactions to safeguard the interest of people going cashless.

Continue FREE with Ads Pay Rs. 1 to Read Without Ads
READ MORE IN:
N. Chandrababu Naidu National
Next Story : 'We Are Going to Become Even Better Friends', Trump Speaks to PM Modi, Invites Him to US
Download the Outlook ​Magazines App. Six magazines, wherever you go! Play Store and App Store