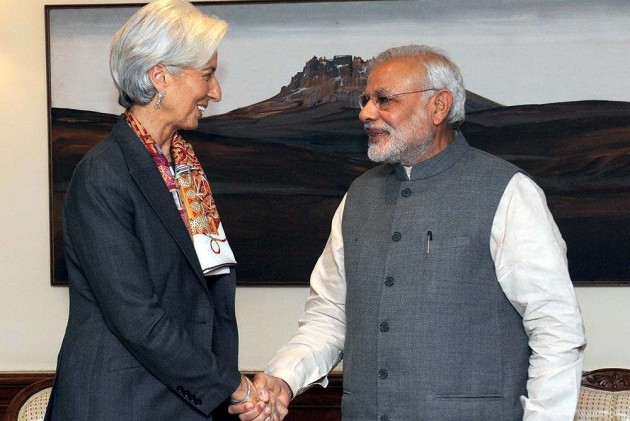 Print
A
A
A
increase text size
Outlook May 07, 2015 12:13 IST IMF Welcomes Passage of GST Bill by Parliament

International Monetary Fund (IMF) today welcomed passage of the long-pending Goods and Services Tax (GST) by the Indian parliament, saying it will lead to long-term sustainable growth in the country.

"We welcome the introduction of GST and one of the fiscal reforms and it is one of the key elements for the long-term sustainable growth in India," IMF's Director for Asia and Pacific Department Changyong Rhee said here today.

"It would be one of the most important agenda of (Prime Minister Narendra) Modi government," he said.

But it remains a very important question as how to implement at the state levels and coordinate, he said at a press conference here presenting IMF's Regional Economic Outlook for Asia and Pacific.

Responding to questions, Rhee said, "We have already count on the implementation of the GST in the 2016 GDP forecast (of 7.5 per cent)."

The GST - originally mooted by the UPA - will subsume excise, service tax, state Value Added Tax (VAT), entry tax, octroi and other state levies after its implementation from April 1, 2016.

Rhee pointed out that one of the good news for Asia is that India is picking up though China's growth is moderating while Japan is recovering.

However, he noted some concern about the ability of the Indian banking and corporate sectors to support the long-term 7.5 per cent per annum Indian GDP growth.

He said India was pushing forward with infrastructure development and aiming for higher economic growths.

The government was also restructuring some of the state banks balance sheets and non-performing loans from the past years' stalled projects. But there was a concern about the banking sector’s ability to support higher potential of the Indian economic growths, he stressed.

Rhee expressed confidence in sectorial growths in the Indian economy, responding to a question on the slowdown in March exports.

"First of all, it is fair to state that so far international society has a high expectation of Modi government implementing reforms," he said, pointing out the inflow of foreign investment, announced investments plans, reforms in many sectors and the GST.

But he expressed concern about implementation process and the state-central government relationship for the progress of the economy.