I'm Innocent, Nothing Will Come Out in Bribery Case: Bansal 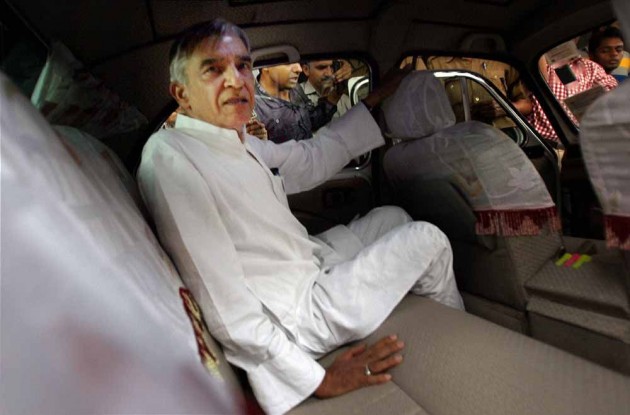 outlookindia.com
-0001-11-30T00:00:00+0553
Putting up a brave face two days after he was dropped as Railway Minister in the wake of the bribery scam, Pawan Kumar Bansal today claimed he is "innocent" and that nothing will come out of the case.

"I am not associated with the case.... I assure you (party workers) that nothing will come out from this case," the Congress leader said at a meeting with local party leaders at his residence here.

Bansal's comments came even as CBI, which has arrested his nephew Vijay Singla, Railway Board Member Mahesh Kumar and others in the Rs 10-crore bribery scam, is preparing to quiz him.

"I repeatedly maintain that I am innocent," he told reporters at the venue.

Bansal, who returned to his home town last night for the first time after the arrest of Singla for allegedly accepting bribe Rs 90 lakh in bribe on behalf of Kumar for fixing a plum plum post for him as member (Electrical) in the Railway Board, convened a meeting of local party level office bearers and activists here.

The move was seen as attempt to show that he still enjoys party's support, party insiders said, adding Bansal will now chalk out his political strategy in the run up to the 2014 Lok Sabha polls.

Welcoming CBI investigation into the bribery charge, Bansal said, "I have nothing to do with the case".

"I have faith in the CBI probe.... I don't want to make any comment on the issue, but I have nothing to do with the case," he said.

When his attention was drawn to BJP's allegations about his family's involvement in the case, a furious Bansal retorted, "It appears I will have to separately explain the definition of family to each one of you (media persons)."

Bansal, an MP from the city, is not new to controversies. He and Ambika Soni, who were members of Heritage Education Society, had courted controversy in 2002 over allocation of land for the society to set up a school.

Bansal's "strong differences" with former UT administrator and Punjab governor Gen (retd) S F Rodrigues in 2008 were said to be behind the scrapping of several projects of Chandigarh, including Medicity, Amusement-cum-Theme Park and Filmcity.

Bansal, along with his wife Madhu and two sons, reached their home in an SUV without a red beacon last night.

In his resignation letter, Bansal had maintained that he was not aware that Singla was in contact with Kumar but he still thought it proper to step down.

Meanwhile, former BJP MP from Chandigarh Satya Pal Jain, said, "I will take him(Bansal) head on.... I am in the process of collecting more documents against his family and their firms."