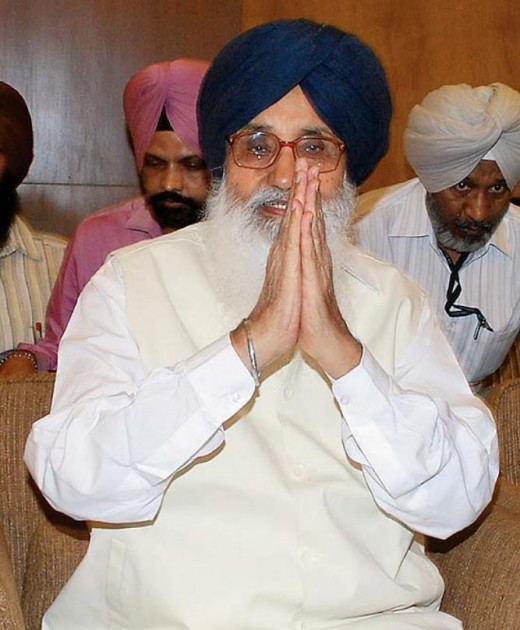 Terming the resignation of Amarinder Singh as an MP over SYL issue a "drama to mislead the people", Chief Minister Parkash Singh Badal on Friday said that if the Punjab Congress president were "sincere and honest" he would have announced not to contest Assembly polls.

Protesting against the Supreme Court's verdict on the SYL canal issue, Amarinder had tendered his resignation as a Lok Sabha member on Thursday.

Further, all Congress MLAs in Punjab resigned over the issueon Friday.

The Chief Minister accused the Punjab Congress leadership of "playing to the gallery" over the issue and said Amarinder and his colleagues were "trying to become martyrs" by tendering resignations just before Assembly polls.

"Amarinder being dubious by nature had enacted this drama just to mislead the people to better his electoral prospects. Had Amarinder been sincere and honest he'd have announced not to contest the forthcoming assembly polls," Badal said.

He dared the Punjab Congress chief to ask his fellow Congress MPs from state to step down on this issue if he was "really aghast" with Supreme Court verdict on the issue.

"Rather he was pitching for President's Rule in the state for paving a way for completion of SYL canal in the absence of any democratically-elected people's government," Badal said.

He was interacting with media on the sidelines of a summit on 'Sustainable Development Goals and Universal Health Coverage- States perspective' organised by the Health and Family Welfare Department, Punjab in collaboration with PGIMER and WHO, India.

He said the SAD-BJP alliance would oppose the "anti- Punjab" decision as "we have absolute and legitimate right over the river waters as per universally accepted Riparian Principle".

He said common man would not allow Congress to succeed in its "nefarious designs" to betray the people and state.

"Congress is known for hatching conspiracies against the interests of Punjab and its people on the inter-state issues including sharing of rivers waters from day one," Badal said.

He said the Congress party was solely responsible for aggravating the "impending crisis".

Badal reiterated that not even a single drop of water would be spared for any state neither anyone would be allowed to lay even a single brick for the construction of this canal.

Recalling the Congress's "conspiracy" to divest the state of its legitimate share in river waters, Badal held the then prime minister Indira Gandhi responsible for Punjab's "crisis" as "she forced" the then Congress Chief Minister of Punjab Darbara Singh into signing an agreement to "give away" Punjab's waters to Haryana.

"She also forced him to withdraw the Supreme Court Case filed by him to protect Punjab river water interests," the Chief Minister alleged.

He said the then Congress rejoiced the occasion, while the SAD had launched a long peaceful democratic morcha for Punjab's interests as a result of which no river waters went out of Punjab since.

"Water is the lifeline of every citizen of Punjab, especially farmers, industry and trade. So as a custodian of state's interest, I am duty-bound to ensure that nobody snatches it," he added.

Earlier addressing the summit, the Chief Minister reiterated the firm commitment of SAD-BJP alliance government to impart accessible, affordable and quality health services to the people.

Laying stress on living a quality life, Badal advised the people to have simple food and exercise daily.

He also advised people to regularly get their health check up done so as to ensure diagnosis of any disease at early stage.

"This would help in leading a healthy and long life by every one of you," he added.