I Would Love to Have a House on Zabarwan Hill: Zubin 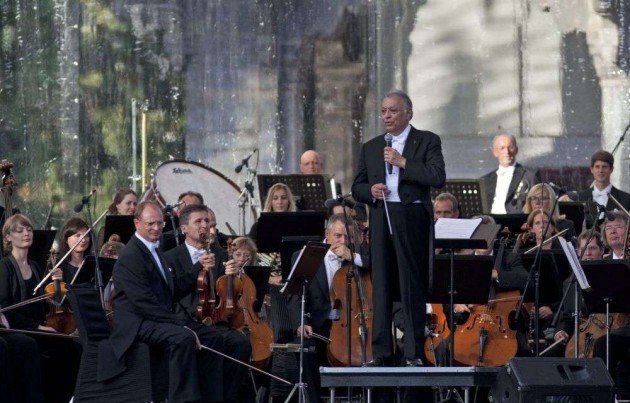 Print
A
A
A
increase text size
Outlook September 08, 2013 13:25 IST I Would Love to Have a House on Zabarwan Hill: Zubin

A day after performing at the famed Shalimar Garden at a unique concert which created political ripples, internationally-renowned orchestra conductor Zubin Mehta today expressed a wish that will never be fulfilled, and yet for which he is grateful.

The 77-year-old Mumbai-born Maestro wants to have a house on Zabarwan hills, which formed the backdrop to his scintillating and yet controversial concert – Ehsaas-e-Kashmir (Feel of Kashmir), but recognizes that non-Kashmiris cannot acquire property in Jammu and Kashmir due to the special status granted to the state.

Although his wish will never be fulfilled, Mehta is happy that Government of India has not allowed people from other parts of the country to settle in this hill state.

"As an Indian, I would love to have a house on top of the (Zabarwan) hill here," Mehta, who is the conductor of the Bavarian State Orchestra which performed here, said.

"I am very proud that Government of India does not allow me as an Indian to buy property here. I am jealous of all those people who live on the shore of Dal Lake. I respect the government for the fact that they have not made settlements here … it is a big word in the Middle East, I am very grateful that there are no settlements here, which has preserved the beauty of Kashmir," he added.

"We were expecting to play for the people of Kashmir in the spirit of brotherhood and humanity," Bachler said.

"(Organisers) turned this concert into an exclusive, elitist event for a selected, invited crowd and this understandably became a political issue, which is a pity and against the aim of art," he added.

Mehta, in a series of interviews to electronic media, said he would love to come back for another concert in Kashmir if the people of the Valley wanted him to. He also said performing in Kashmir was a spiritual experience.

German Ambassador to India Michael Steiner, the brain behind the concert, meanwhile, defended the ‘invitation-only’ event, saying "the security of the members of the orchestra and the invitees was important” in the given scenario prevailing in Kashmir.

"If I am wanted, If Kashmir wants me, I will come back ... (if) all parts of Kashmir (want)," Mehta said. He said the event – Ehsaas-e-Kashmir (Feel of Kashmir) – went beyond his expectations.

"It was much more (than expectation). It turned out to be an occasion which we will be proud of. Let us come back (next time), maybe we can do some things differently," he said.

The maestro, who played most popular compositions of western classical music, tried to reach out to his critics and opponents in Kashmir saying he was their friend.

"Geelani Sahab hum to aapka dost hoon. You don’t believe it! I wish all of our opposition would have come and enjoyed the music," Mehta said referring to hardline Hurriyat Conference leader.

"I am not only a Parsi, I am a Kashmiri too," he added. Mehta said he and his orchestra were not into politics and his endeavour was to use music for starting a process of healing in Kashmir.

"We are not politicians. We cannot change boundaries but we can start a process of healing. The politicians have tried for 60 years. I don’t think they got too much.

"Let (us) have another way, a spiritual way and I think yesterday there was a beginning of some process of healing because Hindus and Muslims were sitting together in complete harmony. Healing and harmony are the two most important factors that we are striving for," he added.

Mehta admitted that he was hurt by some of the accusations made against him ahead of the concert and lamented that his opponents were not well informed.

"The night before the concert, I saw a discussion on TV with 12 people. All speaking candidly … about nine were against it and three people vociferously for it. The nine people who spoke against it really hurt me because they were completely misinformed, they talked about facts that they did not know anything about. Nobody had enlightened them about the matter," he said.

"There was no ulterior motive for doing this concert except for the expression of my dream at the German Embassy last year which the Ambassador (Michael Steiner) took as a challenge. I don’t even know the inner working of Kashmiri politics," he added.

Asked if art and politics could be separated, Mehta said: "No. All my life there has been politics in art but we don't want to change their opinion about changing frontiers, that's not our job".

Mehta said he was not apprehensive about performing in Kashmir even in the face of opposition from some quarters.

"Not at all. People around me were apprehensive, I was told Kashmir is brewing. I am a positive thinker .. I did not even think about cancellation... I have had bullets flying at concerts but I don't want to talk about that," he added.

Mehta said he and his entourage came here as "friends" of the people.

"Here we came really as friends. I come as an Indian, for God's sake. If I was a Pakistani, I would like to come as a Pakistani too. That's why I said subcontinent in the beginning, not India. We are very proud of this place," he said.

On his citizenship, he said his first identity was as an Indian. "Absolutely! I should have brought my passport and showed it, once for all. There are people who think I am Israeli. That's rubbish".