I Reiterate That I Won't Declare Anyone Dead Without Proof: Sushma Swaraj on 39 Missing Indians in Iraq 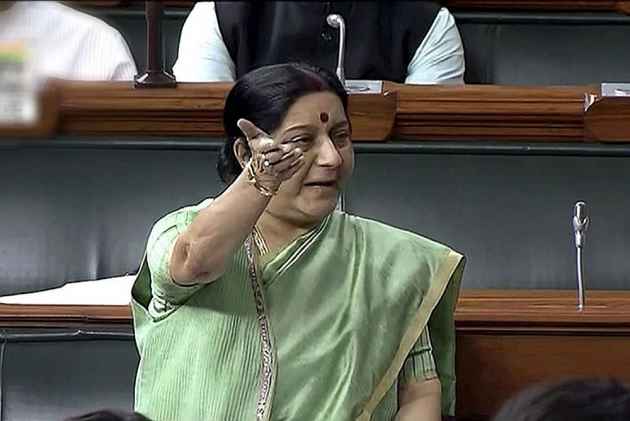 Print
A
A
A
increase text size
Outlook July 27, 2017 12:20 IST I Reiterate That I Won't Declare Anyone Dead Without Proof: Sushma Swaraj on 39 Missing Indians in Iraq

External Affairs Minister Sushma Swaraj on Thursday said the day she gets proof of whereabouts of 39 missing Indians, abducted from Mosul in Iraq, she will inform about them via Twitter or in the Parliament if the session is on.

Addressing the Upper House, the Foreign Minister reiterated her stand that she will not declare anyone dead without proof.

"The day I get proof of whereabouts of 39 missing Indians, I will come here if the session is on or inform via Twitter But I reiterate that i won't declare anyone dead without proof," she said.

Yesterday, Swaraj said that there is no evidence to substantiate the claim that 39 Indians missing in Mosul, Iraq, have died. "And declaring anyone dead without proof is a sin that I won't commit," she said.

Sushma was giving her statement on the 39 missing Indians after a morning of uproar in the Lok Sabha.

Sushma Swaraj asserted that Iraq never claimed that the missing nationals are "dead".

"Why should I believe Harjit Masih's claims that the 39 Indians are dead? It is a crime to do this without proper proof", she said.

Lok Sabha witnessed uproar as the Minister started speaking on the missing Indians, leading to her refusing from giving statements on the issue.

Earlier on Monday, Iraqi Foreign Minister Ibrahim al-Jaafari said that he was not sure about the fate of 39 missing Indians, who were held captive by Islamic State in Mosul.

He said there is no report about them whether they are dead or alive and added that the Iraqi government is doing its best to locate them.

"We're not 100 percent sure whether they're alive or not, we don't know. We are going to do our best, but till now we cannot say anything about their fate," al-Jaafari said.

The Iraq Embassy in India had also informed that search operations are underway to locate the 39 missing Indians, and assured there is a high level coordination between concerned Iraqi and Indian authorities to locate them.

The Government of India has already sent two high-level senior delegations to Iraq to follow up on this matter.(ANI)