I Am Bihar's Daughter, But Entire Nation Belongs To Me: Meira Kumar 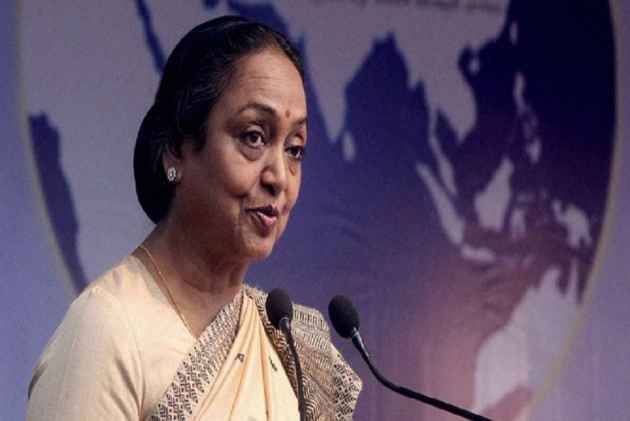 Print
A
A
A
increase text size
Outlook July 07, 2017 10:57 IST I Am Bihar's Daughter, But Entire Nation Belongs To Me: Meira Kumar

Opposition's presidential candidate Meira Kumar on Thursday, while maintaining that she is Bihar's daughter and that Bihar is in her heart, said that the entire nation belongs to her as she took birth on the soil of this country.

While on her visit to Patna, Kumar wished for the better health, happiness and prosperity of the people of Bihar.

"Under the leadership of Sonia Gandhi, 17 opposition parties have extended their support to me. It is fight of ideology. I have full faith that the ideology which is close to the nation, which is in favour of all, will win. I am Bihar's daughter and Bihar is in my heart. The entire nation is ours. We have taken birth here. I request that the entire country supports this ideology," Kumar said.

Kumar has always maintained that it is a fight between ideologies.

Earlier on Tuesday, she said, "This unity of 17 political parties is based on firm ideological positions - the philosophy, and the value system - which are so dear to me and which are so dear to most of the people of the country. That is why I have decided to make ideology - the lone plank of this contest."

Kumar, along with National Democratic Alliance's (NDA) Presidential nominee Ram Nath Kovind, has been campaigning for the upcoming Presidential polls.

Both will campaign in Meghalaya this week.

The election for the next President of India is to be held on July 17. President Pranab Mukherjee will demit office on July 24.