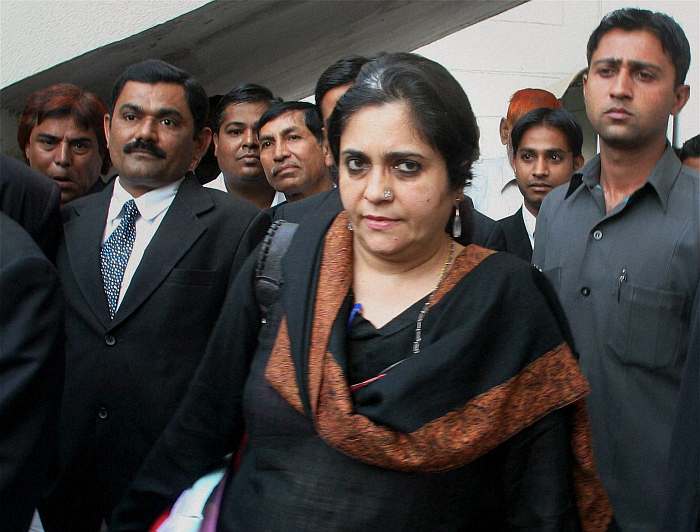 The then HRD Minister Smriti Irani had in 2015 formed a three-member panel comprising Supreme Court lawyer Abhijit Bhattacharjee, Gujarat Central University Vice Chancellor S A Bari and a ministry official Gaya Prasad to look into allegations against NGO Sabrang Trust, based on a complaint.

The panel has submitted its report to the current HRD Minister Prakash Javadekar.

According to sources, the committee has recommended in its report that that there is compelling evidence to book Teesta under sections 153-A and 153-B of the Indian Penal Code (IPC), both pertaining to hate speeches.

Any person booked under the said sections can be punished with jail terms and fine.

The panel is also believed to have raised questions over the manner in which the amount was allocated to the trust "Sarva Siksha Abhiyan" by the previous UPA government.

It is learnt that the NCERT, which was the appraiser of the particular project, had raised some objections yet the ministry sanctioned Rs 3 crore for the project.

Sources said while the committee has not found any misappropriation of the funds, it has blamed the ministry for the manner in which the amount was sanctioned in the previous dispensation and if the panel's recommendations are accepted, the officials then involved in the process can also face action.

Setalvad, when contacted claimed the allegations of misappropriation of funds could not be proved and to counter that charges of spreading hatred have been levelled.

"In typical proto fascist style allegations have covered the infamous misappropriation of funds to now spreading hatred. Creating hatred... Against whom? The RSS? The charge of misappropriation obviously could not be proven and so it is now down to this," she told PTI in an email response.

While HRD ministry officials did not comment on the contents of the report, they confirmed its submission.

HRD ministry had also sought an opinion from the Law Ministry over the issue and is awaiting a response following which a final decision will be taken by Javadekar in this regard.

In June, the Ministry of Home Affairs had cancelled the licence of the NGO under the Foreign Contribution Regulation Act, 2010.

The trust also faces the allegation of using Ford grant to identify and lobby with media persons to "address communalism and caste-based discrimination in India".