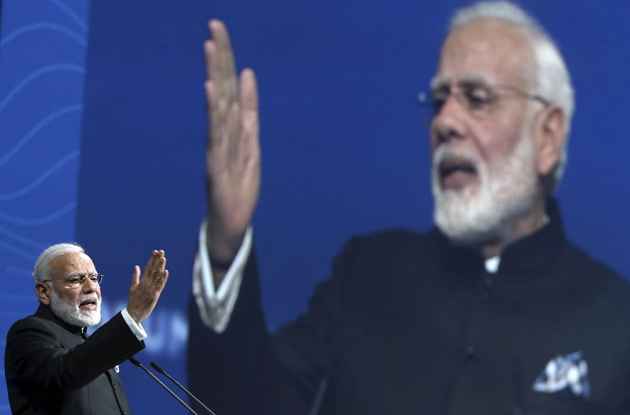 Hours after the US president walked out of the Paris climate accord, Prime Minister Narendra Modi on Friday reiterated India's commitment to reducing carbon emission and leaving an earth which is "beautiful and pure" for the future generations.

Refusing to be drawn into a debate on whether he supported or was opposed to President Donald Trump's action, Modi said he will take the side of the future generations and held the view that mankind cannot exploit nature.

In a speech to global businesses gathered for the St. Petersburg International Economic Forum (SPIEF), he quoted the Vedas to say "exploiting of the nature is a crime but milking of the nature by humans is a right."

Later, when the moderator asked which side of the climate change debate he stood, and whether he disagreed with Trump's stand, Modi remained diplomatically neutral.

"I have in simple way stated the dream of 'new India'. I quoted from 5000-year-old Vedas to say humans have a right to milk the nature but have no right to exploit it," he told the gathering in the presence of Russian President Vladimir Putin.

Modi said he was asked a similar question in Germany earlier this week, before the US decision was made public. At the time, Modi said, he had replied "Paris or no Paris, it is our conviction that we have no right to snatch from our future generation their right to have a clean and beautiful earth."

"It is part of our thinking and for that reason we do not believe in exploitation of the nature. We people do not have the right to take more than necessary from the nature," he said.

Hours earlier, Trump had announced that the US was withdrawing from the Paris climate change deal, which had been agreed by more than 190 nations. The US president said the agreement unfairly benefited countries like India and China.

Modi said India is investing massivly in renewable energy and it has set an ambitious target of adding 175 GW of renewable energy by 2022. "This does not include nuclear energy but is only solar, wind, biomass and hydro (power)."

"This is because we are moving ahead as a responsible country while protecting the environment and this is our very old commitment," he said.

Modi recalled his days as chief minister of Gujarat, much before global warming was discussed or Paris agreement was even discussed. He said Gujarat was the fourth government is the world which had set up a department for environment protection.

"This is our commitment, and we are moving forward based on this commitment," the prime minister said.

By distributing 40 crore LED bulbs, India has in the last three years saved energy "which will help the humankind in environment protection," he said.

"I invite you all, 125 crore people of the country are inviting you, the world's most ancient nation is inviting you for economic development ... In the spirit of 'Sky is the limit', I once again invite you," he told the business leaders.