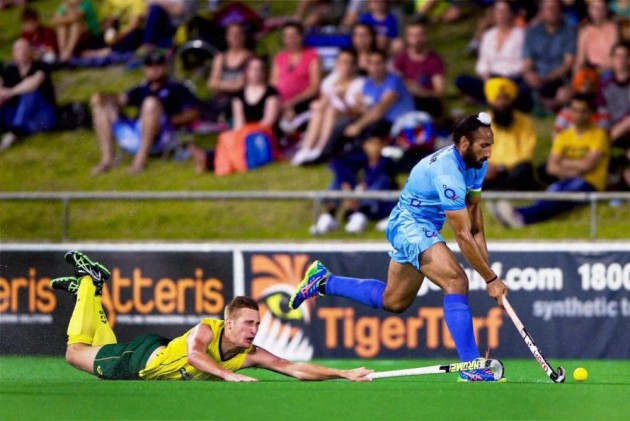 Akashdeep pumped in two field goals in the 13th and 43rd minutes for the visitors, while S K Uthappa (53rd) was the other goal getter for India.

The Sardar Singh-led Indian side broke the deadlock in the 13th minute with a opportunistic goal from Akashdeep who scored from a rebound after V R Raghunath's flick from a penalty corner was saved by the Australian goalkeeper.

India managed to hold on to the lead till the 35th minute before Tom Craig equalised for Australia.

Strengthened by the return of regular skipper Sardar Singh, who was playing in his 200th international match, the Indians started the third quarter on an aggressive note and their efforts bore fruit when they extended their lead in the 43rd minute through yet another field effort from Akashdeep, who guided home a Kothajit Singh pass.

Australia tried hard but India looked the better team on display and made the scoreline 3-1 with Uthappa scoring a brilliant field goal for the Indians.

The hosts pressed hard for goals in the last five minutes but Indian goalkeeper and vice-captain P R Sreejesh stood tall to deny any danger to his citadel.

After losing the first game, India came back to win three games on the trot to seal one of their most memorable series wins.

The visitors had been thrashed 0-4 in the first game, but they made a strong comeback to register 2-1, 1-0 and 3-1 wins respectively in their next three matches.