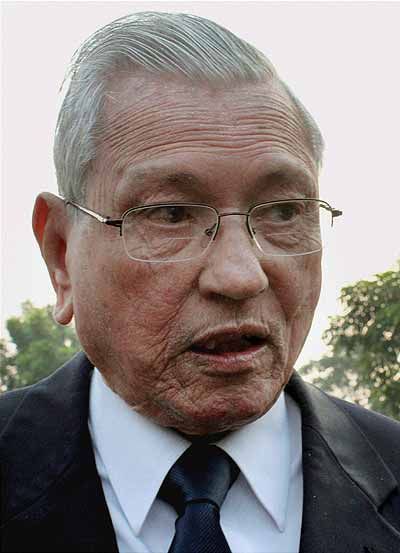 outlookindia.com
-0001-11-30T00:00:00+0553
India's triple Olympic gold medallist and one of the legends of the game of hockey, Leslie Claudius passed away here today after a prolonged illness.

Claudius was suffering from cirrhosis of the liver and frequently needed hospitalization in the past couple of years.

He was 85-years-old and is survived by wife and three sons. One of his sons Brandon lives with him in Kolkata and the other two sons live in Australia.

Claudius was being treated at the Intensive Care Unit (ICU) of a local hospital for abnormal fluid retention.

"In fact his condition had got better yesterday and doctors were hopeful of discharging him. But today morning, it deteriorated," Brandon told PTI.

In past last 11 months, Claudius had been hospitalised four times due to ill-health.

Claudius was one of the five surviving members (Keshav Dutt, Grahanandan Singh, Jaswant Singh Rajput, and Balbir Singh Senior) of the 1948 squad that had won the gold in London when it hosted Olympics 64 years ago.

One of the finest right-half and former captain, Claudius was also part of next three editions of the quadrennial extravaganza that won two gold and one silver, a record only matched by compatriot Udham Singh.

In 1978, Claudius met with tragedy as he lost his younger son Robert (Bobby) in a fatal road accident. Bobby was considered very talented and had also represented India in the Mexico World Cup in 1978.

Along with Dhyan Chand and Ashok Kumar, Leslie and Bobby Caludius were another father-son duo who have represented India at the international events.

Born in Bilaspur, Claudius was conferred with the prestigious Padmashree Award back in 1971.

His dribbling as well as precision passing was work of art and after India won gold medal at the London Olympics, the Times London wrote: "Hockey is not worthwhile seeing if he is not playing."

There is a famous anecdote about what the legendary Dhyan Chand, chairman of India's hockey selection committee for the 1948 London Olympics said about Claudius.

Dhyan Chand would say, "Claudius selects himself, now I have to select the rest of the team."

This year before the Olympics, London Transport brought out a special Olympic Legends Map detailing all the tube stations. The games organisers had renamed Bushey railway station as Leslie Claudius.

West Bengal Chief Minister Mamata Banerjee expressed profound grief at the death of the hockey legend saying it was an irreparable loss to the sports world.

"I express my deep condolence at the death of the legendary hockey player Leslie Claudius. His demise is an irreparable loss in the sports world," Banerjee said.