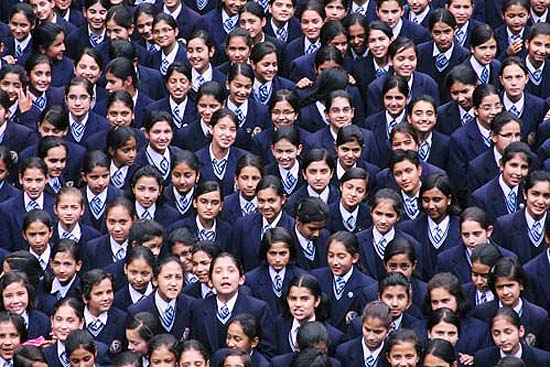 'All India Hindu Convention', organised by the right-wing organisation Hindu Janajagruti Samiti, today demanded a ban on convent schools, claiming that these schools do not allow Hindu students to follow religious traditions.

The convention also demanded a ban on cow slaughter in the entire country.

"Hindu students studying in convent schools are barred from following their customs like putting mehndi, wearing flowers, dupatta, bindi or kumkum. It needs to be stopped. There is a total discrimination," a resolution passed at the convention said.

"A representation has also been made to Chief Minister Laxmikant Parsekar demanding ban on convent schools in Goa which have more then 70 percent Hindu students," said Charudatt Pingle, national convenor of HJS.

The convention, held at Ramnathi village in the state, was attended by representatives of 210 Hindu organisations from 22 states and also from Bangladesh, Nepal and Sri Lanka.

Pinge said if a Catholic religious body can intervene in the government functioning, then Hindu organisations too have the right to raise their demand.

He was referring to the recent meeting of Catholic MLAs called by Archdiocesan Board of Education, a wing of Goa Church, to take up its various demands.