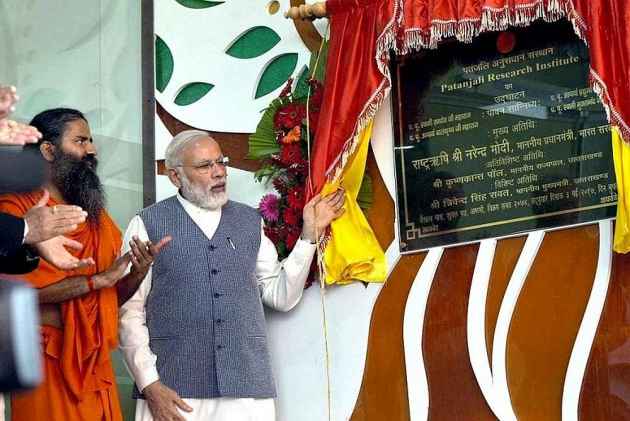 Print
A
A
A
increase text size
Outlook May 28, 2017 15:21 IST High GST Rate on Ayurvedic Items: How Can One Feel 'Achchhe Din', Asks Patanjali

Disappointed over high GST rate on ayurvedic products that provide "care and cure to common man at affordable price", Baba Ramdev-led Patanjali Ayurved has asked the government as to how can people feel and live 'Achchhe Din' without the right to good health.

In a similar vein, industry body AMAM also said that while the government is aggressively promoting ayurveda globally, high tax incidence under GST will make the natural medicines costly and out of reach of the common people back home.

GST rate for classical or generic range of ayurvedic medicines must be nil and 5 per cent for patented products instead of the proposed 12 per cent, the Association of Manufacturers of Ayurvedic Medicines (AMAM) has said.

At present the ayurvedic medicines and products have a total tax incidence of 7 per cent, including VAT, depending on the items. Under the GST regime, these items have been kept at 12 per cent.

"Higher GST on ayurvedic category has surprised us and is very disappointing and disheartening," Patanjali Ayurved Ltd and Patanjali Yogpeeth spokesman S K Tijarawala told PTI in an emailed response.

He further said ayurveda, which provides care and cure to common man at affordable price and is ancient and proven therapy for ages, doesn't deserve such treatment.

"Good health and healthy living is common man's basic right and expectation. Without all these, how can one feel and live 'Achchhe Din'?" he said.

Echoing similar sentiments, AMAM General Secretary Pradeep Multani said: "The Indian government has been aggressively promoting ayurvedic products internationally but what's the point of doing these things when the tax rate is so high and the common people can't afford it at home?"

He further said: "This is sad and unfortunate as the Prime Minister is doing his best to boost the AYUSH system."

The previous UPA government "treated ayurveda industry as step child" but this government has taken steps to take it forward, Multani said, however, adding the high tax rate proposed under GST "will make Ayurvedic, Sidha and Unani medicines out of reach of common man and kill the system".

He said if homeopathic products could be put under 5 per cent slab under GST, ayurvedic products should also be kept under the rate.

Tijarawala said the world is now looking forward to Indian vedic knowledge of Ayurveda. It has created new potential of over Rs 1 lakh crore market for such natural and healthy products.

Prime Minister Narendra Modi had recently even inaugurated Patanjali Research Institute (PRI) established with outlay of over Rs 250 crore for R&D in field of Ayurved, he added.

"We have created a lead being followed by so many other companies. This has opened new avenues of self employment generation in field of herbicultutre, agriculture, ayurved practitioners, naturopathy, ayurveda product manufacturing," Tijarawala said.