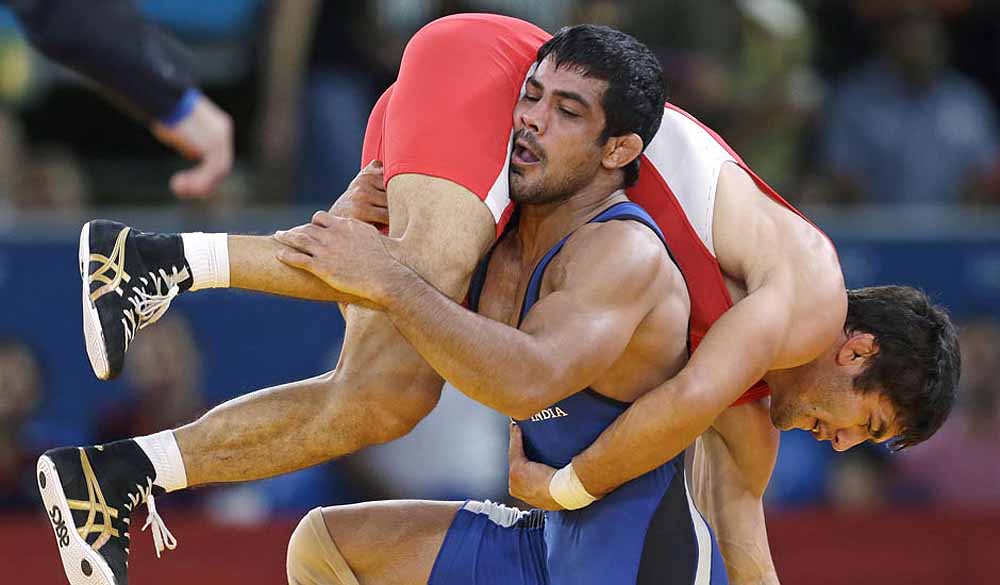 Olympic medallist wrestler Sushil Kumar today lost a legal battle in the Delhi High Court which dismissed his plea for selection trial for Rio games observing it may "jeopardise" the chances of selected candidate Narsingh Pancham Yadav and the country would be the "loser".

Justice Manmohan acknowledged Sushil's feats in the international arena and termed him a "legendary wrestler" in 66 kg weight category but did not allow him to have a chance to compete for the Olympic berth in the 74 kg category.

The court said that Sushil's petition seeking a direction to the Wrestling Federation of India (WFI) to hold a selection trial to decide who will represent India in 74 kg freestyle category at the Rio Olympics was "untenable in law as well as contrary to facts".

"In international arena of sports, medals are won not only by 'brawn' but also by 'brain'. The last minute challenge to selection can disturb the mental preparation of the selected.

"Consequently, a sportsperson innocently asking for 'just a trial' may be jeopardising the chances of the selected candidate to win, having disastrous consequences for national interest. In the duel asked for, the country will be the loser," the court said.

"Keeping in view the conclusions reached above, the petitioner's (Sushil) prayer for a trial is untenable in law as well as contrary to facts. Accordingly, present writ petition and applications are dismissed," it said.

In its 37-page judgement, the court observed that the WFI has adopted a "reasonable, transparent and fair procedure" in selecting Yadav as India's representative to Rio Olympics in the 74 kg category.

"The system suggested by the petitioner (Sushil) of having trials after the qualification event cannot be accepted as the sole method for selection as it implies that the country would not send its best athlete to secure a place for itself in Olympics," it said.

The court said though Sushil has won a number of laurels for India in 66 kg weight category but on consistent current form, WFI's opinion that Yadav "is better is not unreasonable or perverse".

Meanwhile, the court also issued notice to WFI's Vice President Raj Singh asking him why perjury proceedings should not be initiated against him for giving false affidavit before it.

The court said it was due to Yadav's bronze medal in the World Wrestling Championship in 2015 that India got a berth in the 74 kg freestyle category.

"In the present instance, respondent no.5 (Yadav) after winning a bronze medal in World Championship September 2015 is being given meticulous training by the concerned authority so that he is best prepared to represent the country in the Olympics," it said.

The court termed as "unfortunate" that 66 kg category was abolished in January 2014 and Sushil was forced to play in 74 kg weight category but noted that Sushil has not won any major national or international tournament since September 2014.

It said WFI had conducted a fair selection trial prior to World Wrestling Championship 2015, the qualification event, to ensure that the best athlete represents India so that there was a chance to secure a berth in the Olympics.

The court said the decision regarding who should represent the country in "a sporting event is best left to the experts i.E. The concerned national sports federation".

"Power and responsibility go hand in hand. The National Sports Federation cannot be held responsible for performance of its athletes, if it does not have power to select them according to a flexible procedure as long as the same is fair, transparent, reasonable and consistent," it said.

"Keeping in view the aforesaid, this court is of the view that a writ court will not interfere in the exercise of discretion of National Sports Federation and substitute its own judgment except where the discretion is shown to have been exercised in an arbitrary or capricious or perverse manner or contrary to settled principles or practices," it said.

The court noted that initially no allegation of bias or prejudice was made against WFI in the plea and later Sushil, in his rejoinder, had alleged that the federation has targeted him for not participating in Pro-Wrestling League.

It, however, said that the allegation, in the absence of any contemporaneous document, "inspires no confidence".

Referring to the National Sports Development Code, 2011, the court held that it "does not restrict or impinge upon the autonomy or discretion of the National Sports Federations to select athletes/wrestlers to represent India in international sporting events."

The court said "the Code, 2011 does not make it mandatory for respondent number four WFI to hold trials for selection of wrestlers for Olympics just two to three months prior to the event.

"The Code, 2011 only obligates National Sports Federations to judiciously select players to represent India on merit for major international events with the objective of enhancing national prestige and bringing glory to the country."

It said the Code gives full flexibility and autonomy to WFI to decide the process of selection and when to hold trial and it only stipulates that if selection trials were required, they should be held two months in advance.

It noted the contention of WFI which had argued that world wrestling championship was a tougher competition than even the Olympics.

"Consequently, in the opinion of this Court, respondent no.4 WFI in the present case has adopted a reasonable, transparent and fair procedure in selecting respondent no.5 (Yadav) as India's representative to Rio Olympics in the 74 kg category," it said.

The court said selection procedure followed by WFI that the wrestler who has earned a berth for India will represent the country "does not show any element of perversity or anomaly in the instant case as the said practice has been followed by respondent no. 4 WFI uniformly and consistently."

It said this practice cannot be said to be contrary or in violation of the Code 2011.

"The fact that some countries in the world follow the practice of holding trials four to three months prior to the Olympics does not mean that the same policy must be followed by all the National Sports Federations.

"There is always more than one good method of selection. Since the process of selection adopted by respondent no.4 WFI is not arbitrary or perverse, this court cannot substitute its own judgment for that of the experts," it said.

The court also said as per the records, "without exception only the quota winner has represented India in wrestling in Olympics without undergoing any trial."

It said Sushil himself, by virtue of winning a quota, had participated in the 2004, 2008 and 2012 Olympics, without undergoing any further trial.

Regarding Sushil's argument that a trial held 13-month ago may not result in the best athlete participating in Olympics, the court said it was incorrect.

"This court is of the view that whether trials should be held 13 months in advance or 13 days in advance is a decision which the experts should take and not the courts," it said.

The court said that after selection, a candidate has to undergo meticulous training under the guidance and supervision of a coach and a doctor.

"One cannot lose sight of the criticism in the past by the experts that athletes for international events are neither selected nor trained well in advance," it noted.

It termed as "misleading" the argument on behalf of Sushil that for other wrestling events trials were held this year, saying in those events the athletes had not succeeded in the September 2015 qualifying event.

The court said though Sushil was sent to Georgia and Sonepat for training in 2016, it "does not mean that it is mandatory to hold a trial today".

"In the event of happening of an unforeseen event, the respondent did not want to be caught unawares and consequently the petitioner -keeping in view his background and credentials which made him a likely replacement/back-up - was wisely sent for training," it noted.

The court questioned the timing of "duel" sought by Sushil saying he "being a professional wrestler himself would know that any direction to hold a trial at this stage would seriously jeopardise the chance of India winning a medal in the Olympics inasmuch as respondent no.5 (Yadav) would have to halt his training midway and would have to lose his weight earlier than scheduled."

"The high probability of an injury in a trial cannot be 'lost sight of'," it added.

It also said that since Sushil had failed to take part in selection trials in 2014 and 2015 as well as in the National Championship in December 2015 and January 2016 and the Asian Championship held in February 2016, he cannot now seek a trial at this belated stage.

"The Indian coach's opinion, the track record of respondent no. 5 (Yadav) in the last few years and the chance of an injury if a trial is directed to be held with less than two months to go to the Olympics, leaves this court in no doubt that no relief can be granted to the petitioner in the present proceedings," it said.