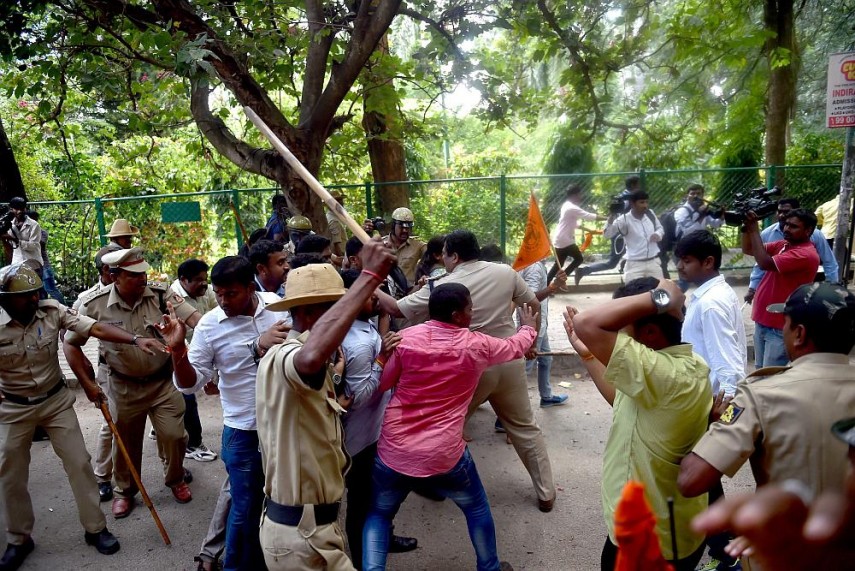 Under attack over the Amnesty International row, Karnataka Home Minister G Parameshwara today said he had not given a clean chit to the rights advocacy group, which has been booked for sedition for hosting an event where anti-India slogans were allegedly raised. "First of all let me clarify because there is a lot of talk in the media about it.... Let me be very clear, I have not given any clean chit to Amnesty International,"

Parameshwara told reporters here as he went into damage after his remarks drew sharp criticism.   "All I have said is that I have not heard Amnesty International being involved in any anti-national activity. Second thing is, there is an investigation going on, and I am not a fool to say that everything is well," he said. To a query, Parameshwara said his remarks had been misinterpreted."Of course, I have been misinterpreted. That is why I did not want to react to it unnecessarily," he added.

"Now that the investigation is going on, the law will take its own course. That's all I have said and I am also standing by that statement," he said. He said he is not going to interfere with the probe as Home Minister and it has been left to the police to decide on the next course of action against Amnesty International.  "The (police) commissioner has made a statement which will be on record. It is left to the police and the IO (Investigating Officer) to take action accordingly - whether to close the case; whether to take it forward... I am not going to interfere in that."

Parameshwara rejected the charge by some Union Ministers that the state government was protecting Amnesty International and had virtually given it a clean chit.
He asked the Centre to get the activities of the NGO probed and take action accordingly.

"Nobody can stop the Centre or the Union Home Ministry or any other agency which is responsible for that (from probing Amnesty's activities)," he added.Parameshwara had on August 20 said Amnesty has never involved itself in any kind of anti-national activities.

"I have not heard of Amnesty International being involved in any seditious activity so far," he had said.

The Kashmiri Hindu Cultural Welfare Trust Chairman Romesh Kumar Mattoo had criticised him for having given a "clean chit" to the organisation when it was being probed for alleged sedition.The Congress had yesterday come under attack from top ministers in the Modi government for "sympathising with supporters of terrorists" following Karnataka Home Minister's remarks.

Leading the offencive, Finance Minister Arun Jaitley had said yesterday 'Azadi' slogans cannot be treated as freedom of speech and slammed Congress and its Karnataka government for "indulging in vote bank politics" over the issue.

"Four days ago, in the capital of Karnataka, during a programme in Bangalore, 'Azadi' (freedom) slogans were raised by a few people."
"An organization, which gets funding from abroad, organized the event and yesterday I read the statement of Karnataka Home Minister in which he said that whatever happened is nothing wrong," Jaitley had said.

Union Minister Ananth Kumar, who met a group of ABVP activists on a dharna in Bengaluru here yesterday, had charged the Congress government in Karnataka with "sympathising with supporters of terrorists" and taking action against nationalists.
However, senior Congress leader Shashi Tharoor defended Parameshwara's remarks on Amnesty, saying national security does not get compromised when a few people chant anti-national slogans.

He had also said, "Charging Amnesty with sedition law was already a big mistake. The NGO has not advocated violence and no one at the conference did so."

Meanwhile, BJP today submitted a memorandum to Governor Vajubhai Vala seeking a probe by National Investigation Agency into the "anti-national episode" at the Amnesty event. The memorandum also alleged that a section of the audience had raised anti-national slogans and the organisers did not stop it."We are having a strong feeling that they (Amnesty) are also a part of this malicious campaign. The programme also showed a nexus between Amnesty and secessionist forces and has exposed a systematic and sustained misinformation campaign against the Indian government agencies, especially the Army," it said.